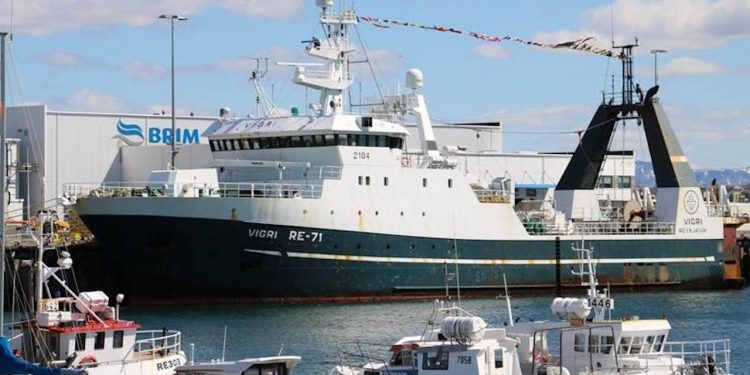 Vigri’s year gets off to a decent start

‘We didn’t get to the south-west fishing grounds this trip, and we spent the whole time on the Westfjords grounds, although we went as far east as the Skagagrunn. The weather was changeable, but you just have to remember that in January you can expect any kind of weather – at least on Iceland’s fishing grounds,’ said Eythór Atli Scott, skipper of Brim’s freezer trawler Vigri, which docked before the weekend after its first trip of the year.

The catch was a green weight of 700 tonnes and an estimated catch value of between ISK315 and 320 million. Eythór Atli Scott said this is a respectable total, considering the conditions.

‘It’s a very mixed catch. This is mainly saithe, and there are also amounts of cod, golden redfish, haddock, Greenland halibut and deep redfish. We started at the western edge of the Víkuráll Gully. There was golden redfish there, and catches became more mixed the further we towed to the north and east. There was haddock to be had on the Horn Bank and everywhere on shallow grounds. We had the most saithe on the Skagagrunn, and even though we were mostly looking for saithe as a specific target species, we could have done with more of it,’ he said and added that there were a few quick visits of less than a day to the Hampiðjan Square, which was where they had Greenland halibut and deep redfish.

A strict hygiene regime has been a feature of everything done on board, with good reason, as experience has already shown.

‘We have made real efforts to keep the ship free of infection. Lateral flow tests are used all the time. We had to leave one crew member behind last time after he tested positive, and he wasn’t allowed back on board until he was fully recovered. If anyone develops a cold, they take a test. Nobody goes into the mess without gloves, the cook portions food onto plates and the engineers keep to their own space and eat in their cabins, as do the deck officers,’ Eythór Atli Scott said.