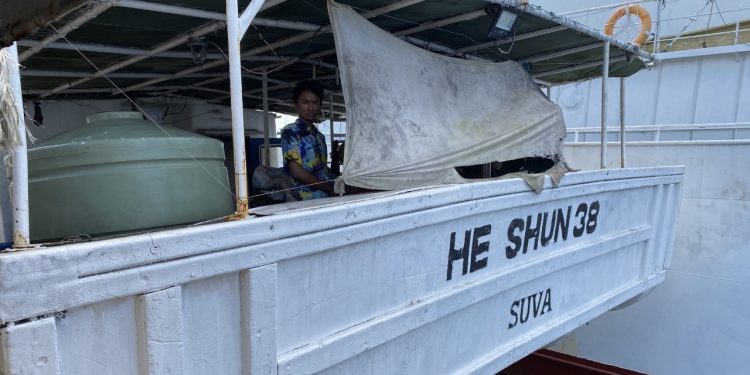 Following the public highlighting on 16th January by Human Rights at Sea (HRAS) of the case of exploited Indonesian crew of the Chinese-owned, Fijian-flagged He Shun 38 (No.00359), both crewmen are reported as being repatriated to Indonesia today with some wages paid.

Furthermore, the Marine Stewardship Council has reported to HRAS that the Fiji Fishing Industry Association (FFIA) has de-listed the He Shun from MSC certification.

From the outset of this reported incident, HRAS sought to contact the Indonesian Embassy, the Maritime Safety Authority of Fiji, the MSC and Lloyd’s Register through their agent, Acoura Marine Ltd. The charity was unable to locate the owners of the vessel.

Following exposure of the case, Lloyd’s Register issued a statement on 20th January, stating that ‘We are currently in discussion with FFIA as part of our investigations into these reports and will take any further action as required under the relevant MSC Fisheries Certification Process.’

Responding to HRAS, the MSC stated that it had taken some time to clarify details.
‘The Fiji Fishing Industry Association (FFIA), the client group for the certification, were unaware of the situation prior to the HRAS press release and, upon notification, have worked tirelessly to address the crew welfare concerns,’ an MSC spokesperson stated.

‘Following a meeting the FFIA held this week with all relevant parties (including the affected crew members), these concerns have now been addressed and we can now confirm the following – we understand from FFIA that wages have been paid both to the crew in Fiji and the family, and the Indonesian Embassy have confirmed that the families share of wages have been paid to the crew’s families in Indonesia.’

‘The FFIA has delisted the He Shun 38 from the MSC certificate, which means it’s no longer eligible to fish for MSC certified catch. They also confirmed that this vessel has not fished in the MSC certified fishery for over a year – the last occasion being October 2019.’

HRAS has welcomed the prompt investigation and action to delist the vessel concerned from MSC certification, though this does not guarantee that such exploitation may not continue in the fleet and supply chain.

‘The charity continues its liaison with MSC staff in respect of this case and in relation to the wider issue of better awareness of worker exploitation in supply chains,’ an HRAS spokesperson commented.

‘The apparent nine months of outstanding wages do not yet appear to have been paid in full. Meantime, HRAS continues to constructively engage with the Maritime Safety Authority of Fiji maintaining direct dialogue.’