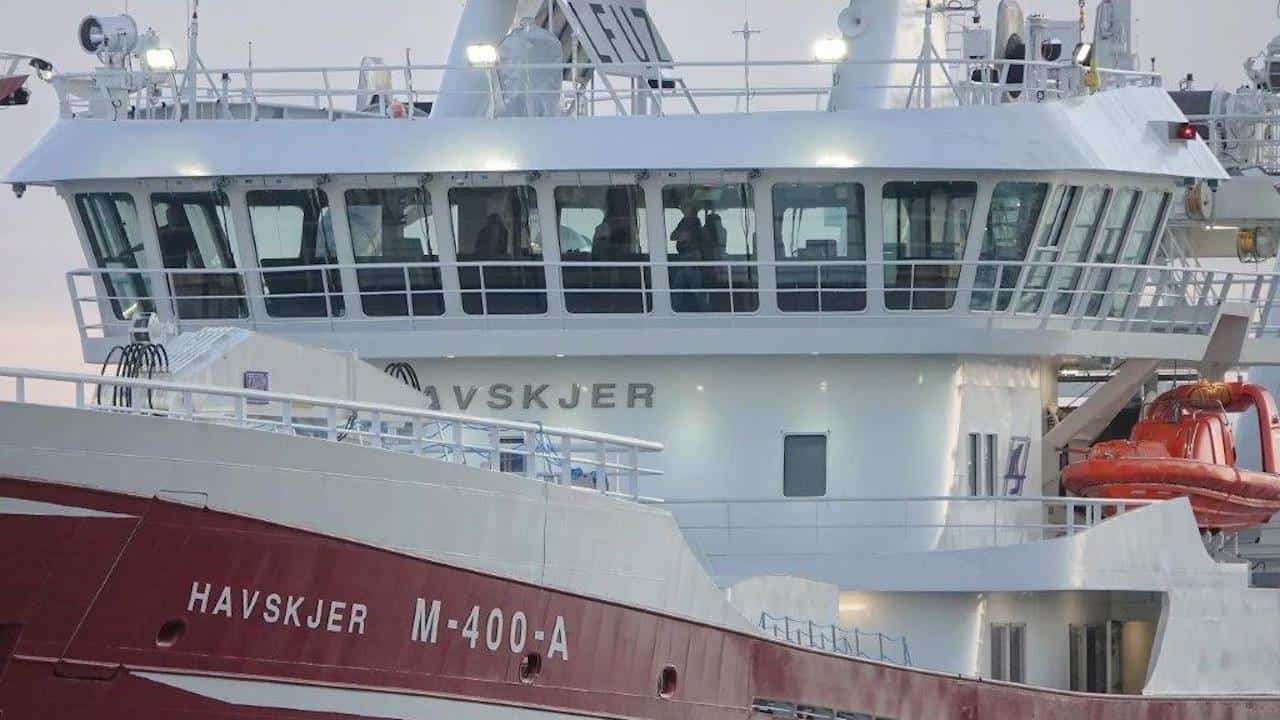 The second newbuild from the Skagen yard to have started life at Karstensen’s own subsidiary in Gdynia, the new Havskjer for Veibust Fiskeriselskap was delivered to the Skagen yard for outfitting in January 2020, and has now sailed for home in Ålesund.

Completing Havskjer has not been an entirely painless process and there have been delays in delivery due to problems associated with the Covid-19 pandemic and in the delivery of key components for the new purse seiner/pelagic trawler.

‘Thanks to a good collaboration between owner and yard, we have reached our goal,’ commented Kent Damgaard at Karstensens Skibsværft. ‘Both owner and yard can be proud of the result.’

Havskjer is expected to operate alongside Veibust Fiskeriselskap’s other pelagic vessels Havstål and Havfisk, trawling for blue whiting during the season west of Ireland, and purse seining for its other primary target species of herring and mackerel.

Built to Karstensens Skibsværft’s own design, the 80 metre, 16 metre breadth Havskjer has a watertight cargo deck and the aft trawl deck is lifted a level higher than usual, increasing freeboard and contributing to greater safety on the working deck.

Catches are pumped aboard at the stern or over the starboard side and pass to the selected tanks via the dewatering system on deck. The 2650 cubic metre RSW capacity is cooled by a double FrioNordica 2×1500 kW/2×1,290,000 kCal/hour system with four 600 cubic metre/hour circulation pumps and two 290cubic metre/hour capacitor pumps. The RSW circulation system has Eltorque actuated valves, controlled from the C-Flow control system. C-Flow supplied the vacuum system with four 66 kW compressor units and twin 4200 litre tanks.

The trawl deck system is from Karmøy Winch with a pair of 90-tonne trawl winches controlled through a Karm autotrawl system, a 57-tonne tail end winch and a pair of 148-tonne net drums, as well as an range of smaller winches.

Havskjer has a Wärtsilä propulsion system with a 12V32E2 main engine turning a 4200mm diameter 4D1095 propeller via a SCV 95-PDC58, 750/130rpm reduction gearbox. The combination of the 6960kW main engine and the Marelli 3400 kW/4250 kVA water cooled shaft generator supply sufficient power for the trawling season and for the electrical system, including the 1300kW Brunvoll side thrusters, when purse seining.

The bank of auxiliary engines consists of one 990kWe Nogva Cummins QSK-38DM and a pair of 660kWe Nogva Scania DI 16 units that can be run in parallel if required. On sea trials Havskjær demonstrated a 17.80 knot top speed under main engine power and a respectable 11 knots in diesel-electric mode.

KS Elektro provided the full electrical installation for Havskjer, in addition to fitting the array of wheelhouse electronics supplied by Furuno Sweden.

The wheelhouse is arranged with four NorSap 1600 chairs and a control position facing a Furuno SmartBridge system with 55-inch Olorin 4K widescreen monitors. The low frequency FSV-25, medium frequency FSV-85 and high frequency FSV-75 sonars, and the FCV-38 and two FCV-1900 and DFF1-UHD echo sounders are all from Furuno, as is the TS-331A trawl sonar, and the array of trawl gear sensors is from Marport.

The communications package is from Sailor and the satellite TV system on board is from Furuno Sweden. Flir supplied the gyro stabilised M625CS thermal imaging system.