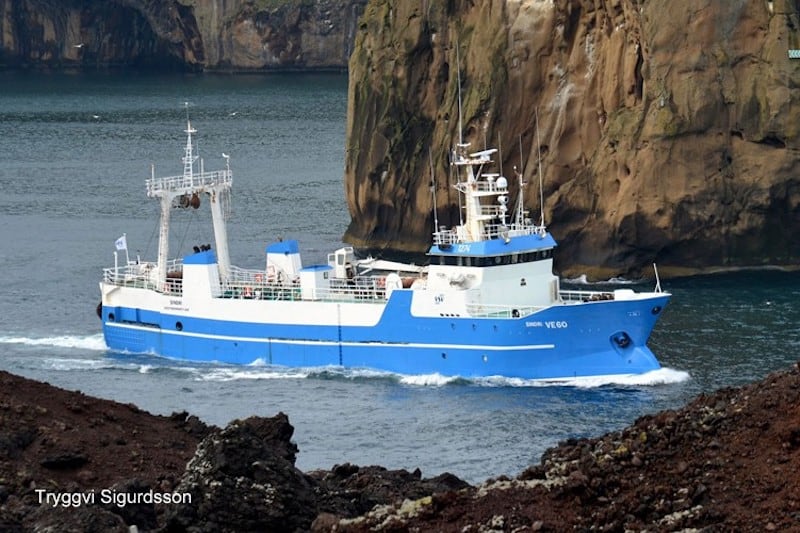 Westman Islands company Vinnslustöðin (VSV) has sold its trawler Sindri to owners in Spain, after operating it for a relatively short time to bridge a gap in supplies while the company’s new trawler was being completed.

VSV acquired the 57.90 metre trawler in the summer of 2017 from HG in Hnífsdalur, which had owned it from new as Páll Pálsson ÍS-102. VSV renamed it Sindri to fish for VSV’s processing plant while the much-delayed Breki and sister vessel the new Páll Pálsson were being completed and brought home from China.

Sindri is now Campelo 2 and has been delivered to its new owners at Marín in Galicia after the sale via shipbroker Albino Moran was completed.

The Sindri and Páll Pálsson names both have a long background to them. Fiskiðjan in the Westman Islands ran a boat called Sindri and subsequently there was a trawler of the same name that fished first for Fiskimjölsverksmiðjan and later for VSV into the 1990s.

The Sindri (ex-Páll Pálsson) that has just been sold was one of a series of the first stern trawlers to be built for Icelandic owners in the 1970s when a group of companies joined forces to build identical vessels. Páll Pálsson was one of the first to be delivered, arriving in Isafjörður in February 1973 after a delivery trip that took it and Vestmannaey across the Pacific and home via the Panama Canal. Of the ten trawlers built in Japan for Iceland, two remain in operation there, Ljósafell and Múlaberg (ex-Ólafur Bekkur), and most of the series were lengthened and modernised in the 1990s.

The original Páll Pálsson was a a 15gt oak-built boat launched at the Marsellíus Bernharðsson shipyard in Isafjörður in 1939, and which was named after the skipper-owner Jóakim Pálsson’s father. The current Páll Pálsson, which was delivered last year, is the sixth to carry the name.

HB Grandi’s new freezer trawler for sale on the slipway?