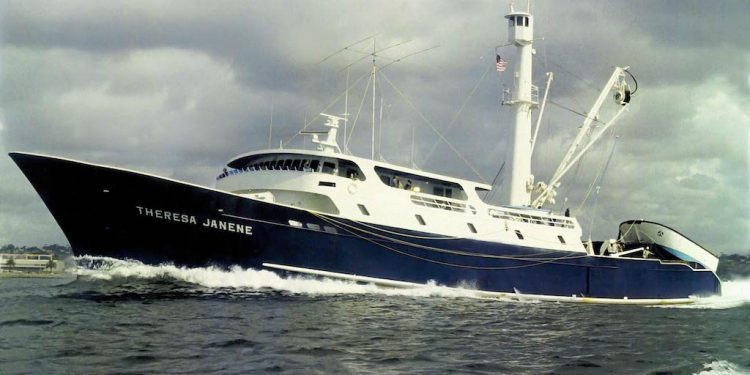 This vessel suffered a fire on board in 2013, is now being refitted in Ensenada – and Marco is supplying all the deck equipment, as well as vessel’s hydraulic system, having already supplied a Marco WS-484 purse winch.

The refit starts with renewing the vessel’s hydraulic system, supplying the hydraulic power units, and the system’s hydraulic valves and accessories.

Once that work has been completed, Marco’s engineers will supply the rest of the deck equipment, which includes one of power block models in most widespread use with the Mexican fleet, the PB-56. This power block model has a stainless steel drum and replaceable cleats that serve to maximise its durability, as well as facilitating maintenance. The company will also supply a complete set of auxiliary winches, and a three-metre control console, which will allow efficient and safe deck equipment operation during fishing operations.

Theresa Janene was the second tuna vessel, after the Jeannine, to feature the classic 223′ design from JM Martinac American shipyards. This type of tuna vessel dominated the American purse seine fleet during the 1970s and 1980s. The vessel was built in 1974 and was originally named as Theresa Janene, although for a time it was renamed Capt. Isidore Duarte.

This new contract consolidates Marco’s position as a technology supplier to the fishing industry in Mexico, and reinforces company’s market leadership in Latin America, where over recent years TH Company has established offices in Mexico, Ecuador and Peru to be closer to its customers.