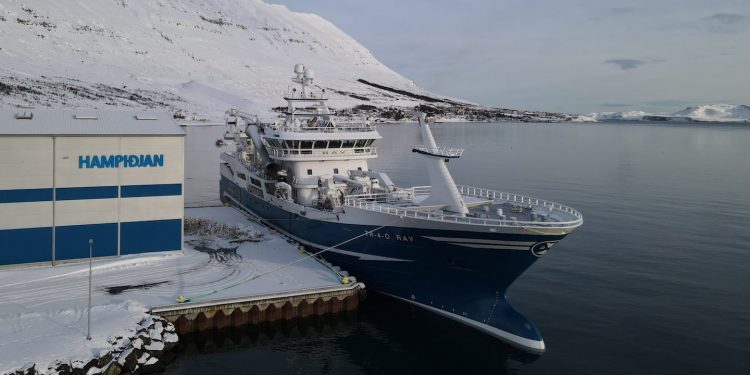 Saving the season for Norwegian purser

When Norwegian pelagic vessel Rav docked with a badly damaged purse seine, the rest of its capelin season was looking dubious. The gear had been fouled in the net bin while shooting away, with the result that whole panels were ripped out.

The skipper and crew immediately saw that this would be a major repair job and that it would take some days to bring the purse seine back to a usable condition.

The purse seine was spooled inside as soon as Rav was tied up at the quayside outside Hampiðjan Neskaupstaður’s net loft. The size of the job meant that additional staff were called in from Hampiðjan in Reykjavík, plus extra manpower was brought in locally.

‘This was the first time that we have taken in a purse seine for repair,’ said Hampiðjan Neskaupstaður’s Jón Einar Marteinsson.

‘It was a pleasure to see that all of the equipment and facilities worked very well. It’s obvious that a job like this would have taken much longer at the old net loft.’

On Wednesday evening the skipper and owners decided to make changes to the net bin on board. There was a quick response and the following morning at team from local steel fabrication company Vélaverkstæði G. Skúlasonar were on board, and worked around the clock until Rav sailed.

Work continued on Rav’s purse seine well into the evening every day through the week, as is always done when a job is urgent. The capelin purse seine was spooled back on board and was stacked in the net bin before midnight on Friday, and Rav departed immediately for fishing grounds off the east of Iceland.

‘We started our capelin season with some serious damage to the gear and spent a week in Neskaupstaður,’ a spokesperson for Rav’s operating company Peter Hepsø Rederi said.

‘It’s a great facility, and fantastic people,’ Rav’s skipper commented while landing 400 tonnes of capelin a couple of days later in Eskifjörður, caught with the repaired gear. ‘A huge thank you to Jón Einar Marteinsson and the team at Hampiðjan. You probably saved the season for us.’

‘The skipper and crew were very happy with the service they received from Hampiðjan, with the company’s technical staff working long days to repair their gear,’ Jón Einar Marteinsson said.

‘They were also very pleased that Vélaverkstæði G. Skúlasonar staff were able to be on the job with almost no advance warning. We wish them good fishing and hope that they can catch their capelin quota as soon as possible – and they they get a decent price for it.’

A few days later, the Hampiðjan Neskaupstaður net loft had another purse seine for repair, as Brim pelagic vessel Venus arrived to spool its gear ashore for work to be done on it, returning to collect its gear after landing its catch in Vopnafjörður.