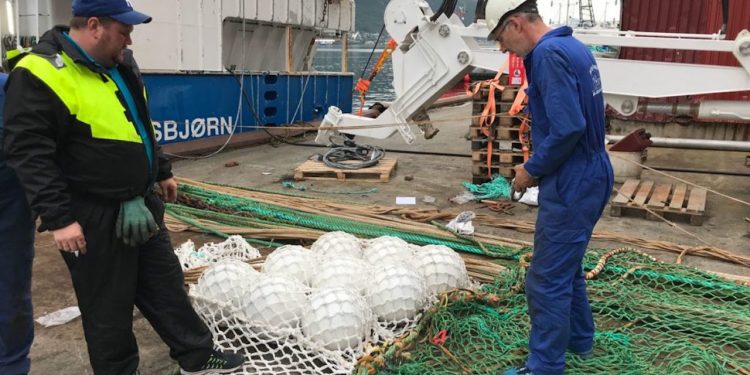 Norwegian researchers are testing pelagic trawl gear for catches of cod to be kept live on board. This is an alternative to seine netting, the most commonly used method for Norway’s growing fishery for cod to be landed live.

Pelagic vessel Asbjørn Selsbane has been the test bench for the trials and Nofima senior researcher Gustav Martinsen has nothing but admiration for the crew and the vessel’s general manager, Andreas Hansen.

‘They are a driving force, and have provided significant resources to support this research,’ he said.
‘I see trawlers developing live catch even more in the next five to ten years,’ Andreas Hansen commented.

‘The condition of the fish when it arrives on board has a lot to say in the quality of the fish products. Driving change is always problematic and expensive. Taking vessels out of commercial activity to do research work is a challenge, but we believe in the development of the industry and that this can be a new way of doing things,’ he added.

‘At Asbjørn Selsbane AS want to develop fishing methods further, and have several reasons to test pelagic trawl as a possible tool for live fishing for cod.’

According to researchers at Nofima, the industry is keen to expand landing live cod year-round, partly because after the spring fishery cod can be held in cages sometimes through to the autumn – and there are costs associated with keeping the fish alive.

The Pelagic/Semi-Pelagic Trawl 2018-2021 research project started out on the premise that pelagic gear is more gentle on the seabed than conventional gears leaving less plastic in the sea than the ropes used for seine netting which has up to now been the preferred method for fishing to land live cod.

‘We felt that using trawls rigged with weights and doors would give us a more controlled way of bringing the trawl to the surface. With a seine net this is more difficult,’ Andreas Hansen said, commenting that data from the gear sensors allows the skipper to haul at a correct speed and to allow the codend to sink if necessary to allow the fish to recover.

‘If there are dense marks of fish, then hauls are kept short.’

According to Nofima’s Gustav Martinsen, traditional demersal trawls with their two- to five-hour towing time are not ideal for landing live fish.

Nofima and the Institute of Marine Research have taken part in the research project together with Asbjørn Selsbane AS, and the Directorate of Fisheries gave permission for a total of three trips in the Barents Sea with pelagic trawls. These took place between 2018 and 2021.

‘This wasn’t a success in environmental terms, if you calculate fuel burned against the volume of catch,’ commented Ólafur Arnar Ingólfsson at the Institute of Marine Research, whose role in the project was to check that size selection and catch limitation were in place as required by the Directorate of Fisheries.

In order to find fish, they eventually got permission to go operate to land. Trials also included fishing closer to the seabed, and using semi-pelagic gear.

The largest haul was 25 tonnes, much more than the preferred amount when fishing for live catch, while most hauls were between two and eleven tonnes. The fish in small hauls were in very good condition, while there was a higher mortality rate in the large bag.

‘Part of the cod from the last days of the last two trips was delivered at Nofima’s live fish facility in Skulgambukt. Here we kept it for four weeks, which is the time it can be kept before it has to be fed. It had some mortality right after it came in, but after two to three weeks there was no mortality. Our focus in this project has been the catching method, and how this affects fish and quality,’ Gustav Martinsen explained.

‘Even though there are still many questions that remain to be answered and we have not been able to prove the theory in practice on a larger scale, I still have strong faith in this,’ Andreas Hansen said.

‘But this is hard, expensive pioneering work, and driving development requires goodwill at many levels. Both the controlling authorities, the administration and the industry have to want to see this development, and everything has to be in place. Today there’s a debate over what the industry itself wants because it has become so fragmented in vessel sizes and classes – but this is still very exciting.’