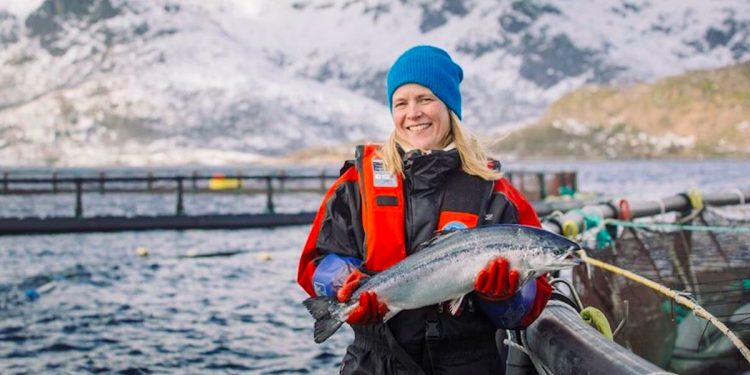 ‘The Norwegian seafood industry delivers high-quality products that correspond with global trends. Consumers around the world are seeking healthy, sustainable, and tasty food. Norwegian seafood is meeting this demand. Both the aquaculture and fisheries sectors have been instrumental in reaching record-level export value in 2019,’ said Norwegian Seafood Council CEO Renate Larsen.

‘Particularly among the younger population we see an increasing trend in which climate, environment and health are increasingly important. Consequently, there is an increasing willingness to pay for sustainable food in most markets,’ she said.

‘Our research and seafood studies show that consumers all over the world already perceive Norwegian seafood as safe, sustainable and of high quality. If we are able to position Norwegian seafood’s position as the most sustainable option, our calculations indicate that the export value can potentially double in the next decade, reaching NOK 200 billion.’

‘In addition to a weak Norwegian krone and improved market access, we have seen a rise in prices for several of our most important commercial species. In sum, this has led to strong demand and higher prices for Norwegian seafood,’ explained the Norwegian Seafood Council’s Director of Market Insight and Market Access Tom-Jørgen Gangsø.

The relationship between aquaculture and fisheries has remained stable with aquaculture exports accounting for 71% (up 8%) by value, and 44.6% by volume (up 7%), with salmon making up the bulk of exports.

‘The weakening of the Norwegian kroner and increased demand for Norwegian salmon are the two main reasons for the increase in value 2019,’ said seafood analyst Paul T. Aandahl.

‘2019 was the year where Norwegian salmon made its comeback in the Chinese market,’ added Victoria Braathen of the Norwegian Seafood Council in China.

Cod down, values up

Exports of wildcaught species were down 10% over the previous year in volume terms, but up 10% in value, with the 181,000 tonnes of exported cod accounting for the most significant share. Cod exports fell 8% compared to 2018, but value was up 7% on the previous year.

‘The decline in export volumes for cod is due to reduced quotas since the peak year for cod in 2013. A significant rise in prices for all the major cod products is therefore an important reason for the growth in value. The fall in volume, assisted by a weak Norwegian kroner coupled with growth in demand, explains the price increase,’ said Ingrid K. Pettersen, Seafood Analyst with the Norwegian Seafood Council.

‘There as been a significant increase in the demand for cod frozen at sea in the UK throughout the year. There is also a clear willingness to pay more for the quality that Norwegian exporters offer,’ commented Hans Frode Kielland Asmyhr, of the Norwegian Seafood Council in UK.

‘On markets with growing competition, increased media coverage and use of the origin mark has been important factors to fortify Norwegian mackerel as a high quality product,’ said Gunvar L Wie, NSC director for Japan and South Korea.