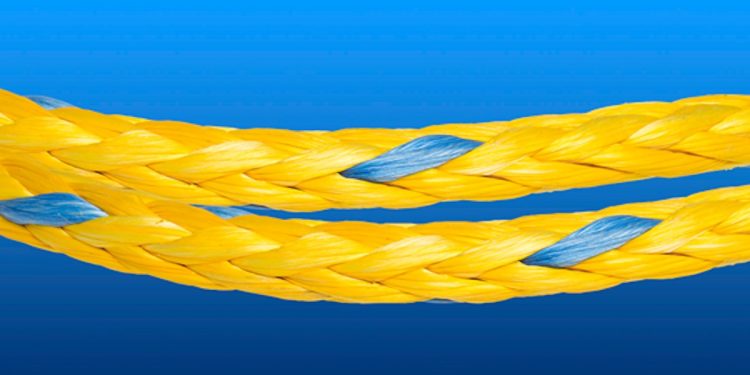 Two years ago Hampiðjan developed a new variety of super-rope under the Prima brand, produced using high-strength fibres from DSM, which also produces the Dyneema fibres that are at the heart of Hampiðjan’s DynIce super-strength ropes.

A number of factors differentiate Prima from DynIce, including that every diameter is produced in a 1×12 braid, with each strand consisting of yarns that are specially spun and impregnated before the rope is braided. This protects the rope during the production process and gives a higher breaking strength. The impregnation is a blend that has performed outstandingly well and this new treatment also makes splicing Prima ropes light work. The price is highly competitive and significantly lower than that of DynIce.

To meet the strong demand for Prima, every variation of this rope has been prepared and Prima is available with a braided protective jacket made in either polyester or super-strength fibres, although Hampiðjan always recommends that the jacket should be made from the same material as the rope it protects, as polyester’s much higher elongation can cause problems, and the super-strength have a far higher abrasion resistance.

Prima is also available with a stiff core, with or without a protective jacket.

Prima Plus, a heat-tensioned version of Prima, is also available in the same configurations, with a jacket or core, or both jacket and core.

Prima Plus is ideal for sweeplines and there are four basic options that are produced to order.
A key innovation is a Prima sweepline with a movable jacket, and this rope is available on drums in long lengths. This makes it possible to produce sweeplines at short notice, as the length can be measured as it comes off the drum. The jacket can be pushed along for the eye to be spliced, and the jacket can then be moved back to cover and protect the splice. The Prima jacket can also be used to protect sweepline eyes.

Prima Warp is a further innovation that makes this super-strength rope able to compete with steel wire rope for trawl warps.

In addition, Primanet is netting made from the same super-strength fibres as the Prima rope, and this is available at a more competitive price than Dynet, while its strength has also shown itself to be better as the Prima yarns form more effective knots.

All of these new products can be found in the Hampiðjan Catalogue in the Prima listing at the end of the netting chapter. The Catalogue can be found at hampidjan.is