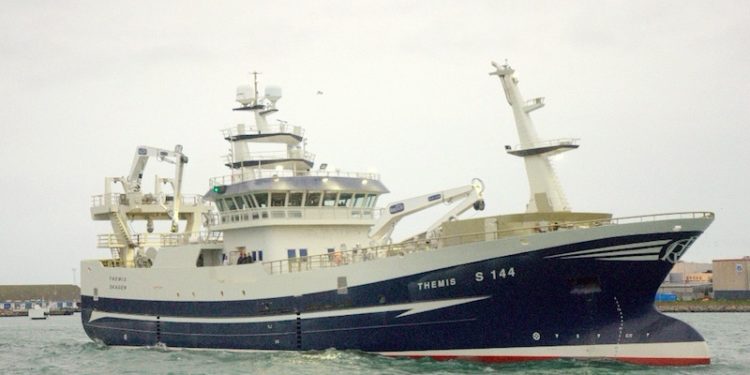 The latest addition to Denmark’s pelagic fleet is the latest in the long series of pelagic vessels emerging from the Karstensen yard in Skagen. Three hundred people gathered at the Skagen quayside to celebrate the christening of the new Themis.

Themis and the Ryberg family from the Swedish island of Rörö have a long fishing heritage behind them and were among the pioneers of the region’s herring fisheries. In 1952 the family acquired the first Themis, a 19 metre boat that was a major event at the time. The new vessel is the company’s first newbuilding since then.

Although based in Sweden, there is a strong Danish connection, not least the new pelagic vessel’s Danish registration, but there has been a long background of cross-co-operation prior to Themis Fiskeri being established itself as a Danish company in 2011.

The new pelagic vessel will fish for herring, mackerel and for industrial species.

‘The best way to predict the future is to make it happen it yourself. That’s what we feel we are doing with the construction of the new Themis,‘ said Anders Ryberg during his speech at christening.

‘In fact, we are also proud of the fact that with the new Themis we can produce herring and protein fish, which are healthy and sustainable foods that only have minimal environmental effects compared to other foods. That’s another good reason to eat fish often and often,’ he said.

Themis is built to a design developed by Karstensens Skibsværft and the partly outfitted hull was delivered by the Nauta yard in Poland for completion in Skagen. Themis measures 63 metres overall with a 12.80 metre beam and has a 2999kW MaK 6M32C main engine driving a 3800mm diameter Caterpillar propeller via a Scana Volda reduction gear.

There are twin 600kW auxiliaries, a 2500kW shaft generator and Themis has 465kW Brunvoll side thrusters.

Carrying capacity is for 1480 tonnes of fish and MMC supplied both the 2x640kW RSW system and the 4x66kW vacuum system. The electric deck equipment package is supplied by Rapp Marine.

Accommodation on board is for up to twelve persons, although Themis sails with a double-shifted crew of five to six, with the crew from Denmark, Sweden, the Faroe Islands and Lithuania. Crew turnover is very low and currently the average age on board is 42 – although the crew between them have 335 years of fishing experience.