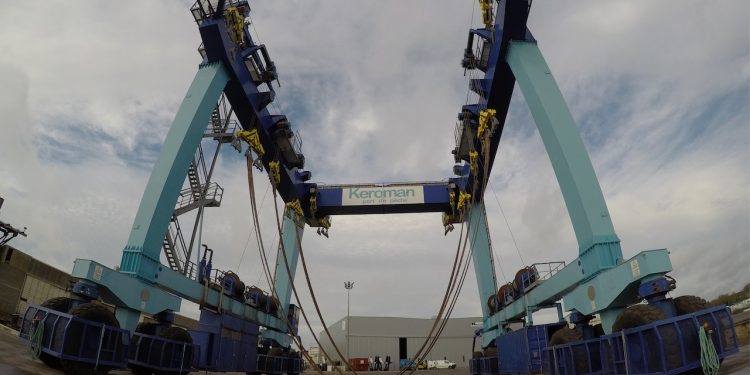 The announcement of the new 800 tonne shiplift for the port of Lorient has been welcomed by Patrice Le Fel, president of the Interprofession du Port de Lorient (IPL), the umbrella organisation that brings together around sixty shipbuilding and repair companies in and around the port area.

This is seen as greta news for all of the companies involved in ship repair and construction in the port, which is also one of France’s premier fishing ports.

The announcement was made by Loïg Chesnais-Girard, president of the Brittany Regional Council.

‘Studies will be launched soon so that within 24 to 36 months we can have a new ship lift,’ said Loïg Chesnais-Girard.

The new lift is ‘probaby’ expected to be uprated to 800 tonnes, compared to the current boat lift’s 650 tonne capacity.

He commented that the ‘probably’ qualification is because studies will have to be carried out to ensure that the ground can support an 800 tonne weight.

‘As soon as I took up position, I announced that the maritime sector would be our priority,’ said Fabrice Loher, president of Lorient Agglomeration.

‘This is good new. This is very important for the ship repair sector which represents 1500 direct jobs.’

He commented that this increased capacity has the potential to allow the local ship repair and boat building sector to seek out new markets.

According to Patrice Le Fel, this development will allow companies to look forward to the next twenty years and to look out for new contracts.

But the current ship lift still has plenty of work ahead of it.

‘Let’s not forget that over twenty years, it has lifted thousands of boats out of the water. Its value has already been proved,’ said Oliver Le Nézet, president of the port of Lorient Keroman.

‘This shows what can be achieved with will and determination. In this complex sector, this is what players in the fisheries and port industry need to gain visibility.’