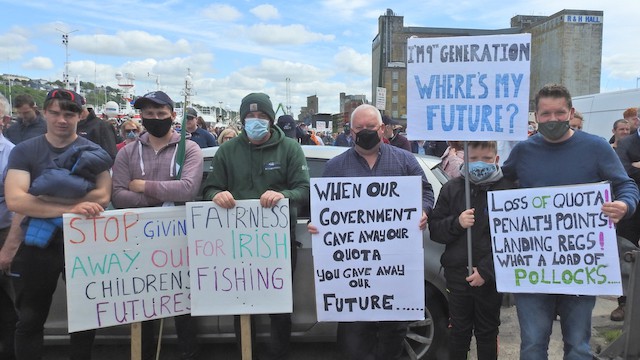 Fishermen from all around Ireland will converge on Dublin for a quayside event on 23rd June, followed by a protest and rally.

A key grievance is that the absence of a level playing field under the EU Common Fisheries Policy is destroying the Irish fishing industry and rural communities.

Inshore and offshore fishing vessels are set to gather early on the morning of 23rd June at the entrance to Dublin port, before steaming in convoy up the River Liffey, through the East Link Toll Bridge to tie up at John Rodgerson’s Quay.

From 1000 on 23rd June, fishermen wish to invite the public and media to come and view the fishing vessels at John Rogerson’s Quay, meet the men and women who work these vessels, hear their stories and talk with their representatives.

A Protest and Unity rally supported by protestors from all sectors of the Irish Fishing Industry and coastal and rural communities will be held at 1200 noon in Guild Street Park at the Spencer Dock beside The National Convention Centre where the Dail will be sitting.

The Rally will be addressed by Fishermen and PO representatives highlighting the issues facing the Irish Fishing community. Following the rally, fishing representatives will hand deliver a letter outlining the plight of the industry to the Taoiseach.

The letter reiterates the demands made at the recent successful protest held in Cork, and serves notice on the Taoiseach and the Irish government that further actions are planned.
The protest is supported by the IS&WFPO, KFO, IS&EFPO, IFPO, IFP&EA, IIMRO, IFSA and inshore fishermen.

The events organisers expect that all Covid-19 restrictions and social distancing requirements be observed by all participants. Stewards will be in attendance and all instructions and guidelines must be respected by protestors. A berthing plan will be provided, with larger vessels to tie up first to make full use of the space available.

All vessels expecting to attend must notify their PO or the organisers in advance to be included in the flotilla.