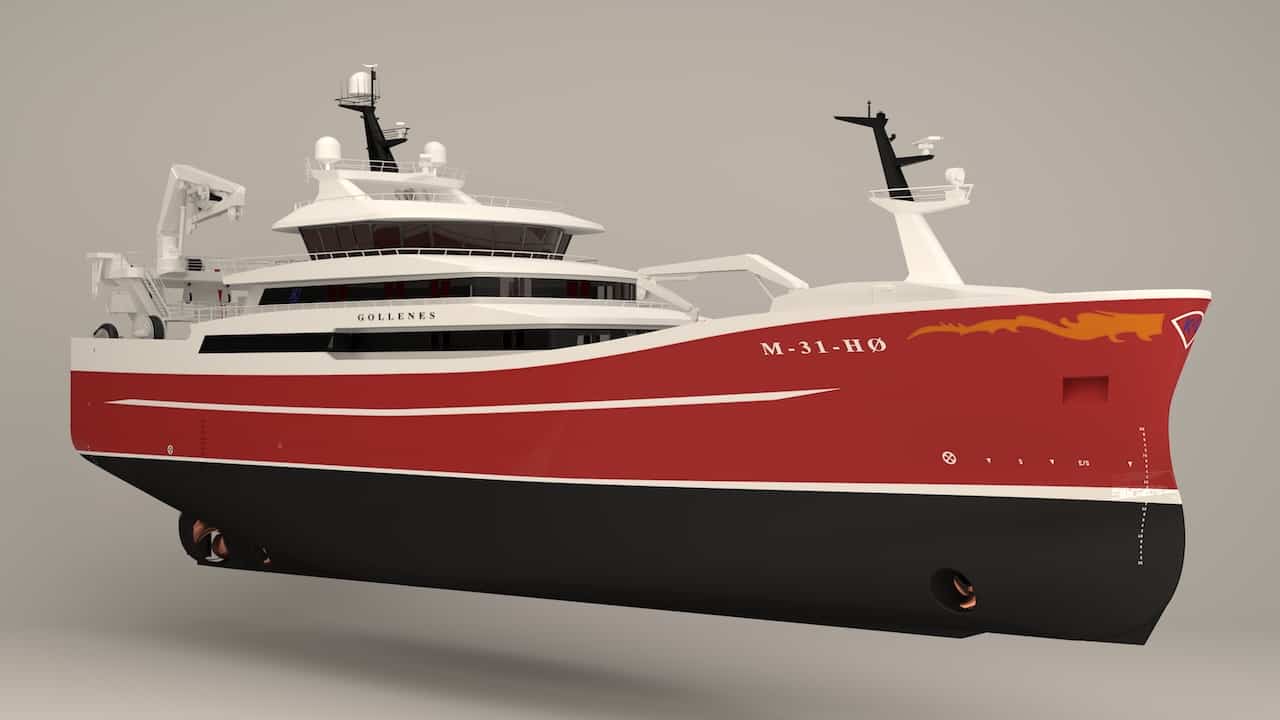 The latest in a series of new generation pelagic fishing vessels has been ordered from the Karstensens Skibsværft yard in Skagen by Norwegian fishing company Gollenes AS.

The Fosnavåg-based company is owned by the Ose and Kvalsvik families, and headed by skipper Frode Kvalsvik, while the next generation of the two families is also on board, represented by Ivar Ose Bjørneset and Willy Kvalsvik.

Gollenes AS went back to Karstensen for the newbuild, which replaces the present Gollenes, delivered by the Skagen yard in 2011. Yard and owner have a decade of co-operation behind them, and this latest development is seen as a natural progression in this successful collaboration.

The company’s fishing patterns include pelagic trawling for herring and mackerel, as well as for some industrial and whitefish, and the new Gollenes will be able to participate in all of these fisheries.

As with other pelagic vessels on order from Karstensen for operators in Ireland, Scotland, Norway, Sweden, the Faroe Islands and Denmark, Gollenes is the yard’s own design. Safe working conditions have been a key factor in the collaborative design process between the yard and the owners, and unlike with the present Gollenes, the owners wanted the whole cargo deck to be watertight. The company has been actively looking for innovative options for optimising and working conditions and the crew’s safety and comfort, bringing together aspects of the company’s experience with its current vessel and the yard’s ongoing portfolio.

The 69.99 metre LOA, 14.80 metre breadth Gollenes will have a green profile, focused around the hull design and optimisation of systems related to the trawler’s operating profile in achieving the lowest possible fuel consumption and emissions.

The propulsion system will consist of a 3955kW ABC 6 DL 36 main engine powering a large-scale, slow-running Brunvoll Volda propeller and gearbox adapted to the ship’s precise operating profile. The propulsion installation includes a take-me-home option and allows for diesel-electric operation. Brunvoll will also deliver the 950kW side thrusters.

Gollenes will have electric winches, electric fish pump, heat recovery from all engines, LED lighting throughout and a number of other measures to ensure minimal energy consumption. The electric winch system will be from MacGregor Rapp with three trawl winches and four net drums. The electric pumps will be arranged to pump over port or starboard quarters.

The layout includes a factory deck with emphasis on efficient workflows and gentle catch handling, plus silage facilities for full utilisation of raw material.