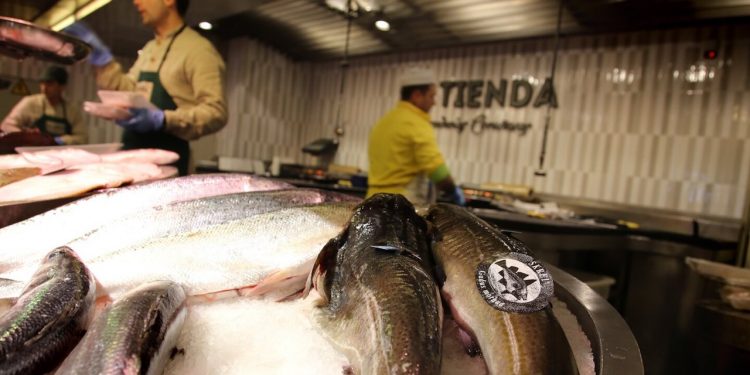 Norway exported seafood worth NoK 8.7 billion in February. This represents a 5%, compared with February 2020, and continues the downward trend that started in January.

‘Although seafood markets are still strongly affected by the corona pandemic, the value of seafood exports in February is the second-highest February on record. This is partly because record high volumes of individual species like salmon and herring have been exported,’ said Renate Larsen, CEO of the Norwegian Seafood Council.

During February, export values for most species fell compared to the record month of February of 2020, except for king crab and herring.

‘A year ago we saw historically high prices for salmon and cod, and that was before the pandemic struck and reduced the sale of seafood in hotels and restaurants globally. It should also be mentioned that the picture is nuanced and that there is still significant uncertainty associated with future export development for individual species,’ Renate Larsen said.

‘When the corona pandemic started, China was the country that first shut down society, which had a significant consequence for salmon exports. In Europe, Italy was the hardest hit in the first phase of the pandemic. Here, the fear of infection led to a fall in demand for salmon even before the country detected coronavirus. In February this year, it was precisely these two markets that showed the most robust growth in value for salmon exports,’ said Paul T. Aandahl, Seafood Analyst with the Norwegian Seafood Council.

According to the Norwegian Seafood Council’s seafood envoy to Italy, Trym Eidem Gundersen, increased salmon sales are the result of several regions receiving relief from the corona restrictions in February.

‘The fact that there is no longer a curfew also means that people are visiting shops more often, which is positive for the sushi market. Among other things, the relief means that the restaurants can stay open until 1800. The low price compared to last year also plays a significant role. Unfortunately, there have been new restrictions, which may mean that demand will fluctuate in the future,’ he said.

Exports of fresh cod to Spain in February fell by 10%, although much enters the country via Denmark.

‘The main reason for somewhat weaker exports to Spain is a late start to the cod season. The trend for exports of fresh cod is nevertheless positive, and this is especially true for cod. In February, Spain had the strongest growth in imports of cod and increased its import volume by 14%”, said Seafood Analyst Eivind Hestvik Brækkan.

‘We see that landings are now increasing, and we expect a new record volume of cod for Spain this year. Lower prices than last year contribute to increasing consumption,’ added Bjørn-Erik Stabell, the Norwegian Seafood Council’s Seafood Envoy to Spain.