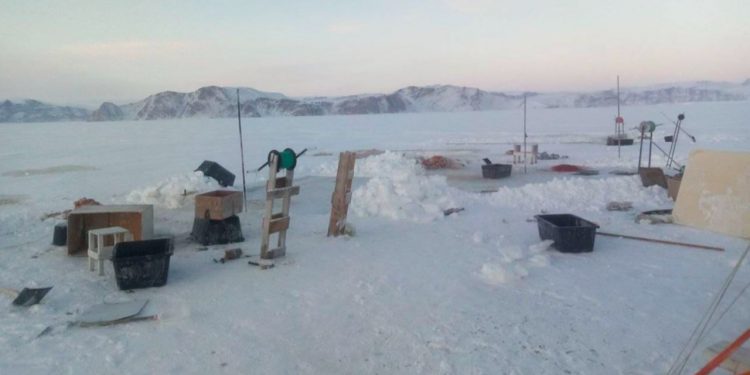 Hunting halibut through the ice

This year’s fishery for halibut at Qaanaaq in Greenland has got off to a good start, with good catches of Greenland halibut caught around 70 kilometres inside the fjord. At this time of year the seas is frozen over, so the fishermen fish through the ice.

While the fishermen work from portable cabins that are placed on the ice during the season, catches are collected and driven to the Inughuit Seafood AS factory in Qaanaaq, where the catches are headed, tailed and frozen.

‘The amounts of halibut are better than at the same time last year, so I’m confident there will be good fishing this season in the Qaanaaq area,’ said plant manager Ujuut John Olsen.
Most of the fishing is taking place 700 kilometres into the fjord near the island of Qikertat, because closer to Qaanaaq there tend to be smaller fish.

‘The fishermen go into the fjord either by dog sled or snowmobile. While fishing at Qikertat, they live in transportable huts on the ice and fish for a week at a time. Some fishermen also bring some of their catches from the fishing area to Qaanaaq. But when the weather allows it, we pick up about four tonnes of halibut in the Qikertat area every day,’ Ujuut John Olsen said.

Inughuit Seafood was established in 2013 by Royal Greenland in partnership with fishermen, catchers and other residents of Qaanaaq. Since then, the volumes reaching the facility have increased year on year.

In 2018, a production line was set up, and that the plant has since produced tailed and headed halibut. The factory currently employs ten staff in production.

‘If the fishing continues to go well, we work in two team shifts, a day team with ten employees and an evening team with five employees. We can produce and freeze four tonnes of tail- and head-cut halibut daily,’ he said.

‘As we really want to provide a proper service for the fishermen, we are also open on weekends.’

He commented that the fishing can be expected to continue until some time in Many, or when the ice starts to break up.