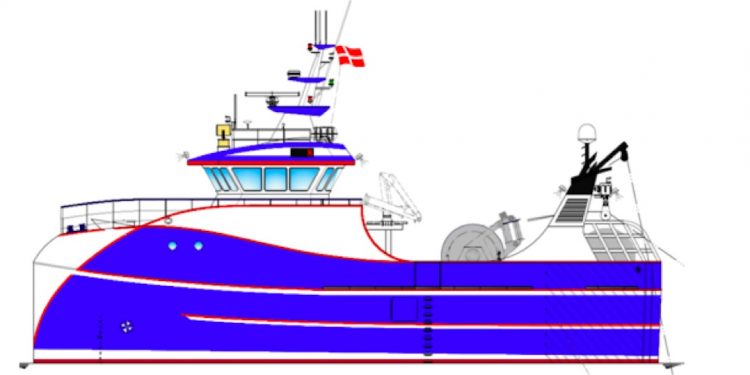 Denmark’s fishing vessel of the future

A three-year Fishing Vessel of the Future project run by Erhvervshus Nord has submitted its conclusions that for a 24 metre vessel fuel consumption can be reduced by 61% and by 45% for a 17 metre boat, by optimising energy usage systems.

‘We wanted to create a fishing vessel with every aspect energy optimised – and we have been successful. We are down to an energy consumption of less than 50% compared to a traditional vessel. This makes the result interesting for fishermen, as one of their biggest expenses is for fuel consumption,’ said Erhusvshus Nord’s Per Frank Hansen.

‘There is an estimated savings of 61% for a 24 metre vessel and approximately 45% for a 17 metre vessel. This fuel saving is only on propulsion, fishing gear, hull and electricity consumption. If you take into account the fish processing with all the heat and cold utilised, and other small optimisations, the savings will be even greater.’

The design is for a steel-hulled vessel, which most vessel owners prefer, with diesel-electric propulsion, as this saves fuel and also enables the use pf two propellers, but without the need for twin power trains. The 17 metre design allows further savings to be achieved by using batteries.

‘With this concept, Danish fishermen and those in other countries have been given a set of ideas and a tool to make the right choices when they are faced with renovating or building a new vessel. We see great potential for these types of vessels throughout Scandinavia, Iceland, the Faroe Islands, Greenland and Northern Europe. Of course, we hope to be able to increase our market share of new buildings in this segment,’ said Jesper Faurholt, CEO of the JOBI Shipyard in Strandby.

In addition to the many financial aspects, the design provides improvements to the work environment and safety on board. The overall concept is based on technology and materials that aexist on the market today. In the future materials such as carbon fibre or aluminium and new options such as fuel cells and batteries could also be considered.

‘Of course, we’re keeping an eye on developments so that we can always provide as mush guidance as much as possible based on available products,’ Jesper Faurholt said.

During the project, the participating bodies concluded that state aid schemes in the fisheries sector are too small and too few, and do not sufficiently encourage new buildings with large energy savings.

‘We will argue, based on the report, that there are such great environmental savings to be gained that the state should encourage the construction of these types of ships by changing the subsidy structure. In Norway, a substantial grant can be obtained to build new, energy-efficient vessels with up to 50% in support,’ Per Frank Hansen explained.

The partners will bring together a group of fishermen, stakeholders and politicians and plan to base their arguments for more future climate-oriented support schemes to be established, based on the report’s findings.