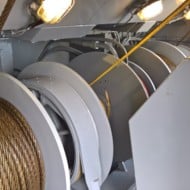 A German-flagged Eurocutter has undergone a refit in Urk, carried out by TCD, the technical division of Visserij Coöperatie Urk (VCU), with a group of local sub-contractors.

Vertrouwen GRE-33 has spent six weeks in refit, with sea trials carried out on the IJsselmeer last week before being handed back to skipper Klaas van den Berg, whose main requirement was to improve towing power. Vertrouwen has been fitted with a new Masson gearbox plus a new Sip Marine 1700mm diameter propeller with heavier blades.

Also as part of the refit, a Couperus bow thruster was installed, the Luyt winch was overhauled and an additional drum was fitted for twin-rigging, and the wheelhouse layout was altered.

The catch processing layout was also overhauled and improved so that Vertouwen can switch from shrimp trawling to fishing and back without having to remove or add equipment. Prior to arriving for the refit at Urk, the trawler had so far spent the first half of 2016 on shrimp.

Hirtshals Yard back in action