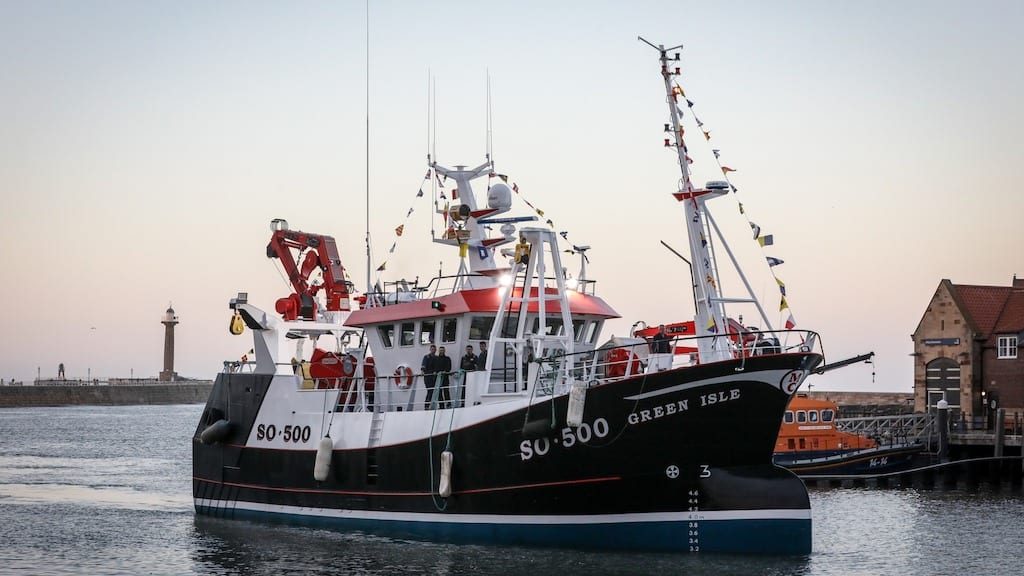 This new trawler, like the older vessel it replaces, is intended to alternate seasonal pelagic trawling for tuna and small pelagics with twin-rigging for langoustines and other demersal species.

Green Isle has a 22.67 metre overall length with a 7.50 metre beam, with accommodation on board for up to eight crew.

Built to an SC MacAllister design, Green Isle has a round bilge hull, transom stern, bulbous bow, soft nose stem and with full length shelter deck. The layout below main deck level has a steering gear compartment aft, an engine space and three RSW tanks that can be converted to serve as a conventional chilled fishroom. A forward space contains the RSW system and sonar compartment.

At main deck level are the galley, mess, oilskin store and washroom, with the trawl deck aft. This has a pair of split net drums lined up to the stern hatches in the shelterdeck.

Seaquest systems supplied the deck machinery, with two 18-tonne trawl winches aft of the wheelhouse and a mid-wire winch located forward under the shelterdeck. Seaquest also supplied the deck crane on the shelterdeck and a powerblock crane mounted on top of the aft gallows, as well as the fish pump setup for handling small pelagics and routing these to the RSW tanks.

Catches of demersal species and tuna are taken on board through the hatch in the shelterdeck forward, with the codend’s contents dropped into a hopper for sorting and transfer to the fishroom. KER Group supplied the 3 tonne/day ice machine on the main deck that feeds an ice locker in the fishroom below.

The main engine is a 480kW Mitsubishi S6R2-T2MPTAQ3M driving a four-bladed 2500mm Promarin propeller via a Reintjes WAF 573L gearbox with a 7.474:1 reduction.

Auxiliaries are a 335kW Mitsubishi S6B3-T2MPTAW-20 and a 150kVa Cummins QSB7180KVA, plus a 40kVa Mitsubishi S4S-DT harbour set located in the forward compartment.