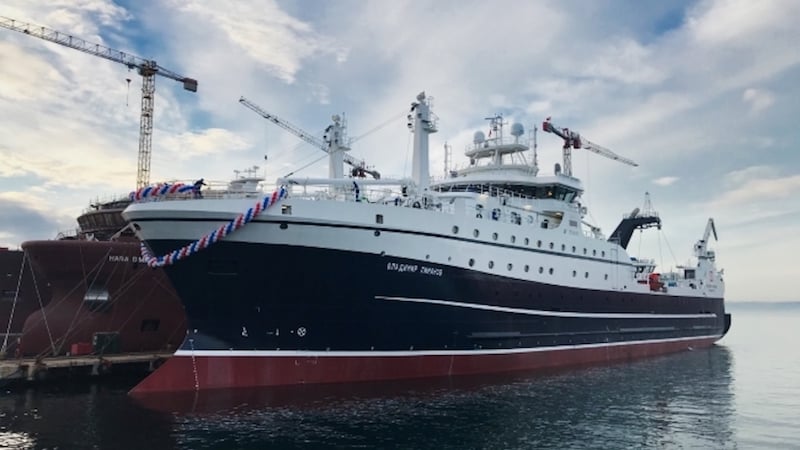 The first of a new series of factory vessels for the Russian Fishery Company has been handed over by its Turkish builder. A further ten vessels in the series are being built at the Admiralty Shipyard in St Peterburg.

As the delivery process progresses, RFC plans to decommission older tonnage, and has already taken Bazhenovsk out of service in September this year, ahead of the new trawler’s completion.

These modern vessels offer opportunities for more efficient operation and a higher quality of production on board, with sophisticated factory decks capable of generating a new level of product quality. Vladimir Limanov will operate largely on pollock, producing fillets as well as being the first Russian vessel to produce high-grade surimi at sea.

Vladimir Limanov is expected to operate in the Russian Far East, fishing around 60,000 tonnes annually, with 100% utilisation of catches.

According to the company, the new vessels are able to operate with emissions of CO2 at 50% lower per kilo of catch compared to the current fleet.

‘I have sailed on fishing vessels I understand what a priceless gift we are presenting to our fishermen today,’ said RFC general director Viktor Litvinenko.

‘Vladimir Limanov is not just a highly efficient trawler. This is a truly second home for the crew, where they live and work for several months in a row. Working and rest conditions ensure that work will be safe and rest will be as comfortable as possible. The previously unattainable catching and processing capacity of the vessel will provide fishermen with a decent income.’

RFC’s new vessel is named after industry veteran Vladimir Limanov (1933-1990), who spent his whole life with the fleet, both at sea, where in 1957 he began as an engineer with the Sakhalin Shipping Agency, and ashore at the Inspection of the USSR Register Ministry of the Navy.