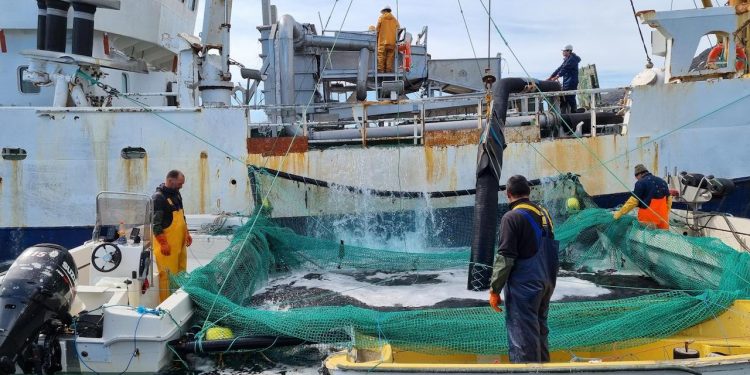 A programme of working with live cod has been a success for Royal Greenland, as this has developed since the initial pilot project in 2015.

The Nutaaq cod is produced in Maniitsoq, and from small beginnings when 25 fishermen took part in the scheme, this has grown to around 120 fishermen who are today supplying Royal Greenland with live cod that are kept in cages.

During a recent visit by Greenland’s minister for fishing and hunting Aqqaluaq B. Egede, Royal Greenland operations manager responsible for crab and cod catchers Sten Sørensen explained the development of this gentle method of handling live cod.

‘Nuutaq cod is in demand. Consumers in Europe, and especially the UK, have become aware of this product, but it has also taken many years to get to the point at which we see increasing demand,’ he said, explaining that the fish are caught coastal fishermen using bottom-set nets, and placed in cages that Royal Greenland supplies. After ten days in a cage the fish are collected by wellboat Maniitsoq and taken to be processed in a process that takes a maximum of two hours.

‘What earns these cod the Nutaaq mark is not just the low-intensity fishing and processing methods, but also that the fish are processed with no feed in their stomachs. In traditional fishing, fish are landed with a stomach full of food. This makes the meat looser, and falls apart easily when it is to be filleted. This product is not in great demand on the world market, as demonstrated by the low price per kilo of cod,’ Sten Sørensen explained.

‘On the other hand, we found out through the Nutaaq project that the fillets are firmer, whiter and tastier when the fish have been in a cage for at least ten days. For Royal Greenland, it is about creating added value from the raw material that is available, and when consumers demand Nutaaq rather than the usual cod, it is good not only for Royal Greenland, but also for the fisherman.’

Responding to criticism that there is a level of cruelty in keeping fish in cages in this way, he acknowledged that there are some challenges in collecting fish from cages in good time, but stated that experience has shown that cod can spend up to eight weeks in cages without ill effects and there is no scientific evidence that cod suffer in the production process. He added that this method is highly sustainable. ‘We get to sort the smaller cod from the cages back into the sea. This creates a more sustainable process and protects the resource,’ he said.

This fishing method has grown significantly in recent years and Royal Greenland has responded by increasing its capacity, including several times using factory trawler Sisimiut as a floating processor vessel.

‘We invested in several cages last year, so there is now are a total of about 200 cages. The interest in the Nutaaq fishery from the fishermen in Sisimiut had been low in recent years, but now more people want to participate, and we are working to get more cages for these fishermen,’ Sten Sørensen said, and added that the significantly higher quality of the product fetches prices that benefit both Royal Greenland and the fishermen who supply the initiative.