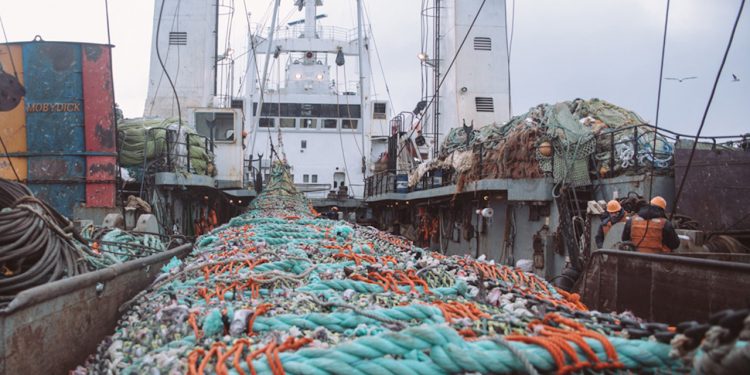 Despite the challenges faced by the Russian fishing industry this year, the Russian Fishery Company expects that its 2021 figures will show that 90% of its Alaska pollock quota has been caught, with 302,000 tonnes landed.

As well as maintaining its catch rates, RFC has increased production of high value products at sea, including fillets, minced fish and surimi, and the first of the company’s new generation of factory vessels, Vladimir Limanov, has already produced approximately 2300 tonnes of surimi.

Both overseas and local markets have been developed, and the volume of fully processed products supplied to the Russian market has increased by 70% over the previous year, a long-term contract was signed with Fish Processing Plant No. 1 to supply the domestic market with pollock products and the first contracts to supply surumi to both Russian and export markets have been concluded.

Production going to the European Union has grown from 12,000 tonnes of fillets and fish mince in 2020 to 20,000 tonnes in 2021, and the company plans to increase this to 25,000 tonnes next year. Products are shipped either direct from Vladivostok to Europe and the US, or via China or South Korea.

‘We are following a strategy aimed at avoiding raw material exports, instead developing full processing ourselves. The high quality of production, ensured by fully processing of catches on board, as well as paying attention to the our customers’ requirements and standards, are our key priorities,’ said Saveliy Karpukhin, RFC’s first deputy general director with responsibility for strategy and commercial matters.

In addition to its pollock catches, during 2021, Pacific Rim Group increased its sales of RFC’s herring to the Africa by 20% compared to last year.

Next year the company expects to take delivery of the first of its new trawlers from the Admiralty Shipyard, built to the same design as Vladimir Limanov, extending stiff further its capacity for producing high-grade products at sea.