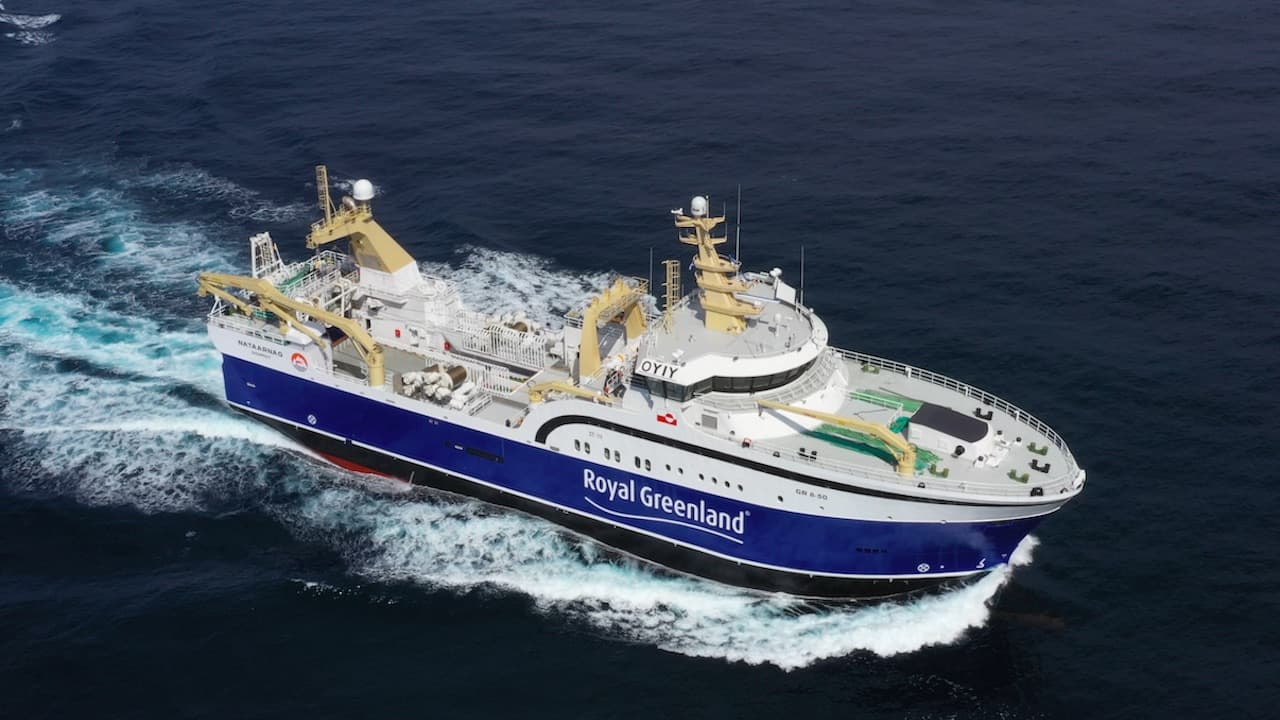 The latest in a series of freezer trawlers for Greenland built at Astilleros de Murueta in Spain has been delivered as Nataarnaq arrived in Nuuk for the first time.

Built for Ice Trawl Greenland, Nataarnaq has an overall length of 82.30 metres and a beam of 18 metres, and is built to the same overall Skipsteknisk design as Sisimiut and Avataq.

Nataarnaq has a 7200kW main engine, a 120 tonne/day processing deck and a 2950 cubic metre refrigerated fishroom. Accommodation is for a crew of up to 30.

The deck is laid out with electrical Seaonics hardware, including four 45-tonne permanent magnet winches, enabling the new trawler to operate with three trawls, managed via a Seaonics Scantrol control system.

Seaonics also supplied the bank of eight 18-tonne sweepline winches at the head of the trawl deck, three 30-tonne gilsons, twin 12-tonne codend winches and a package of smaller winches for handling the trawl gear.

As Ice Trawl Greenland took delivery of its new trawler, the former Nataarnaq has been sold to Royal Greenland and becomes Kaassassuk.

‘We saw that it makes sense to buy the old Nataarnaq because the quota situation allows space for one more trawler. Our most important task is to manage the quota as well as possible and by going for the bigger, higher-value shrimp, we need more capacity,’ said Royal Greenland’s trawler manager, Andrias Lava Olsen, who knows this trawler well, having sailed on it as both chief mate and skipper.

‘We know the trawler well and even though this is the smallest of the deep-sea shrimp trawlers, it is known for performing really well. We named it Kaassassuk because we have had a trawler of the same name before and despite its small size, it was always one of the trawlers that do well.’

Kaassassuk’s first trip under its new name will be under skipper Niclas Petersen and chief mate Søren Mølgaard.