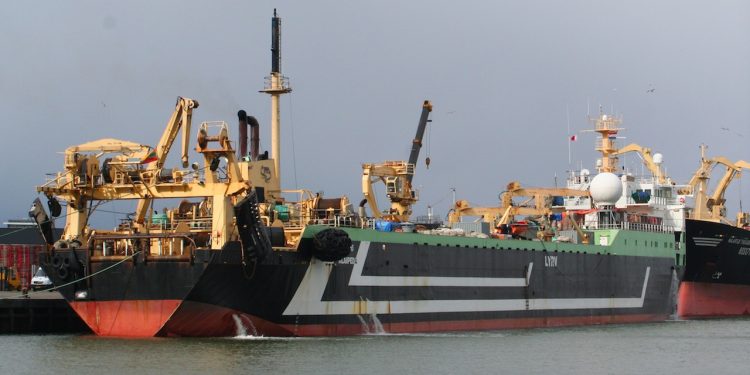 The Delegation of the European Union to Mauritania has responded to a recent Greenpeace statement claiming ‘massive looting of Mauritanian fish stocks essential to food security’ by freezer trawler Margiris.

According to a statement by the delegation, Margiris has been fishing in Mauritanian waters since 7th March this year fishing in accordance with the rules established by the fishing partnership agreement between Mauritania and the EU and with the Mauritanian regulations provided for this type of fishing.

‘It holds a fishing license issued by the services of the Mauritanian Ministry of Fisheries and Maritime Economy. It is followed by satellite via the VMS system of the Mauritanian Coast Guard and if an infringement is noted during its movements, it will be boarded by these same Coast Guard,’ the Delegation states, pointing out that under the EU – Mauritania fishing agreement, that this type of fishing takes place beyond 20 miles offshore to preserve sardinella stocks closer to the coast.

‘Since 7th March, Margiris has been fishing beyond this limit. A scientific observer is also scheduled to embark on board the next time it dock in Nouadhibou. Catches made by this vessel since 7th March are 94% sardine, 3% mackerel and 1.6% horse mackerel. No sardinella, because that far from the coast, sardinella are becoming scarcer.’

‘The accusation of overexploitation of West African pelagic resources that is levelled against this vessel are therefore unfounded.’

The Delegation points out that since 2015, EU pelagic fishing vessels active in Mauritania within the framework of the fishing partnership, have fished only around 10% of the total pelagic catches, which are entirely intended for human consumption markets, especially located in the large metropolises of coastal Africa.

‘The other fleets active in this segment – Turkish, Chinese, Russian and Mauritanian fleets – are therefore responsible for the remaining 90%, most of which is intended for the production of meal. It is desirable that the NGO also take an interest in the impacts of these fleets,’ the Delegation states.

‘It should be noted that the EU is very attentive to questions of food security, sustainable management of resources and employment in the fishing sector in Mauritania. Whether it the agreement in force or the one that is under negotiation, the EU is concerned with preserving vital resources for feeding local populations and the European pelagic trawlers contribute to food security in Mauritania by giving up 2% of their catches for the benefit of the most vulnerable populations.’

Through the partnership, the EU and Mauritania have set up a joint scientific committee which ensures the scientific monitoring of resources, just as the EU provides financial support for Mauritanian fisheries research but also for protection and conservation. resources, including financing of marine protected areas. In addition, the Delegation states that the partnership generates hundreds of jobs for seafarers and port staff in Mauritania.