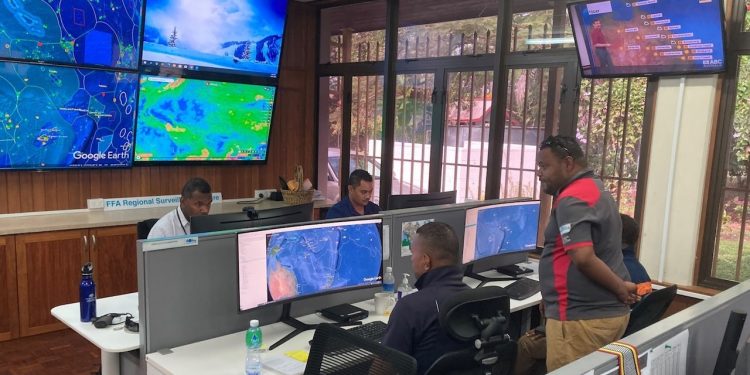 One of the largest fisheries surveillance operations in the world, Operation Kurukuru, has come to a successful conclusion following 12 days of international co-operation to target IUU fishing in the Pacific.

‘The Operation included fifteen Guardian Class and Pacific Patrol Boats from Pacific nations operating alongside five Australian Navy, French Navy and United States Coastguard vessels. Seven aircraft from the FFA, Quadrilateral and regional partners provided air surveillance, as well as satellite surveillance and use of other emerging technologies,’ he said.

‘The sheer size of the area covered is enormous and underlines the importance and ongoing success of such a large-scale, co-operative Initiative.’

The Operational area consisted of the 15 Pacific Island FFA Members EEZs and adjacent high seas. The operational area was over 23 million square kilometres in size – equivalent to more than times the land mass of Australia.

FFA Surveillance Operations Officer CMDR Robert Lewis, RAN, shared that to date that over 300 vessels have been remotely sensed by satellites or sighted by ships or aircraft  and 78 vessels have been boarded either at sea or in port.

‘The intelligence and analysis piece is an important part of our technical work,’ said CMDR Lewis.

‘Thanks to the extensive effort on surveillance, inspections and emerging technology, we continue to verify the identity of vessels and assess compliance risks of vessels committing IUU fishing. The operation detected a number of vessels of interest which remain under investigation.’

He commented that FFA’s Regional Fisheries Surveillance Centre (RFSC) has 24 officers from Solomon Islands, Samoa, Australia, NZ, Tonga and Papua New Guinea working towards maintaining the Regional Surveillance Picture during the operation.
‘This involves analysing information and data across FFA’s member nations. In addition to the regular information that the FFA RFSC coordinates and filters as part of its day-to-day work, the operation receives, reviews and processes satellite-based surveillance imagery to augment and confirm the overall Regional Surveillance Picture.’