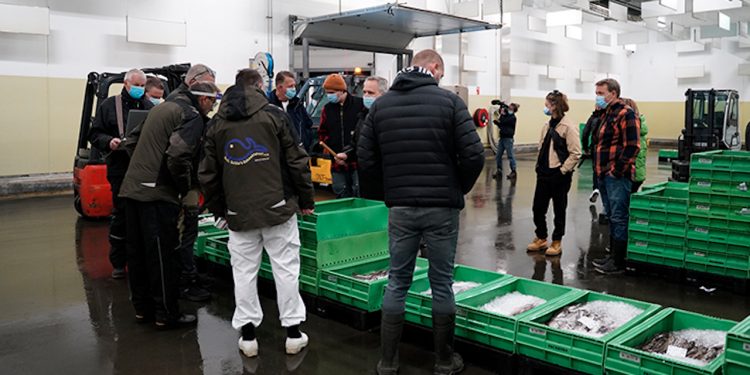 The Hirtshals fish auction comes under new management as of 1st January next year. The current management, Fiskeauktion Nord, and the company taking over, the fishermen-owned Fiskernes Fiskesortering, had been in talks for some time over a possible merger – but the upshot has been that it has acquired Fiskeauktion Nord’s activities.

Fiskernes Fiskesortering aims to have as much control as possible over factors related to landing and settlements, so that the fishermen are in the best possible position.

‘The challenges facing the fishery in the future place higher and higher focus on service, operation and costs. In the spring we approached Fiskeauktion Nord, so we could discuss possibilities for increased co-operation,’ said Fiskernes Fiskesortering director Finn Møller.

‘The idea was floated to incorporate the Hirtshals fish auction into Fiskernes Fiskesortering’s activities. This arrangement is primarily to create the most favourable conditions possible, both for fish boxed at sea and foro fish graded ashore.’

Fiskeauktion Nord has so far run the fish auctions in both Hirtshals and Strandby. The company was set up five years ago, bringing the two fish auctions together to achieve economies of scale, including shared administration, and also to make way for a smooth generational change.

‘When there is a desire from a fishermen-owned company in Hirtshals to run the auction itself, I think this will be the right thing for Hirtshals to do, and we will not stand in the way of that,’ said , auctioneer at Fiskeauktion Nord in Strandby.

‘We are really happy about the good co-operation between Hirtshals and Strandby, and an agreement has been made for this to continue in the future, even if the Hirtshals part is returned to the Hirtshals fishermen.’

Alongside the handover, current auctioneer Karsten B. Pedersen has chosen this moment to slow down after 37 years at Hirtshals fisk auction, although he will remain close to the auction for some time to come.

As of 1st January, Fiskernes Fiskesortering director Finn Møller will be in charge of the management and operation of the two companies.