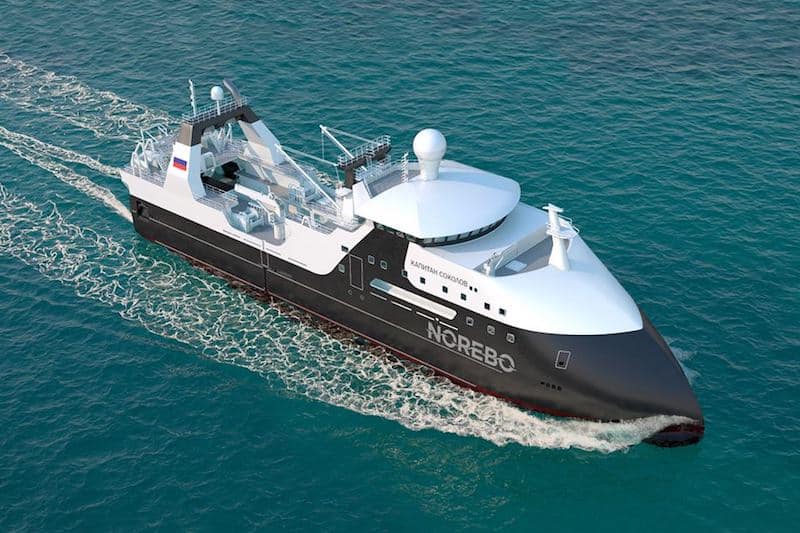 An order placed by fishing group Norebo with the Severnaya Verf (Northern Shipyard) in St Petersburg for six trawlers has been boosted with an additional four of these 81 metre factory vessels. The additional four 170710 project trawlers are to be delivered 2020-2023.

These innovative trawlers with their distinctive inverted EnduroBow are designed by Nautic Rus, also based in St Petersburg, and the the funding for the extra newbuilds comes from Norebo’s own funds as well as in the form of support from Sberbank.

According to Norebo Group’s Alexandr Isakov, the trawlers, ordered for four entities within the Norebo Group, will be able to produce fillets, minced fish, caviar, livers and fishmeal.

‘These trawlers will fish for pollock and herring in the Sea of Okhotsk and the Bering Sea,’ he said. ‘It’s only with new vessels equipped with high-tech systems that we can ensure optimal processing, as well as high levels of safety and comfortable conditions for the crew.’

The initial series of six vessels was placed some time ago and the yard is currently cutting steel for the second in the series, while the first, Kapitan Sokolov, is at the quayside for outfitting. The first six trawlers are expected to fish for mainly cod and haddock in northern waters.

‘This allows us to optimise the costs of design, as well as construction and sourcing equipment,’ he said, commenting that following the signing ceremony, the yard’s orderbook for civil shipbuilding includes the ten factory vessels for the Norebo Group, three longliners for Wirma and one for Globus.

Russian legislation requires that at least 30% of the construction of these new fishing vessels must be provided by Russian suppliers.

The ten Norebo Group trawlers are designed to have an 81.60 metre overall length, with a 16 metre beam and a 6200kW main engine. The factory deck throughput capacity is expected to be 150 tonnes per day, and each will have a 100 tonne/day freezing capacity, as well as capacity for canning and fishmeal production. Accommodation on board is for a crew of 70-80 persons.