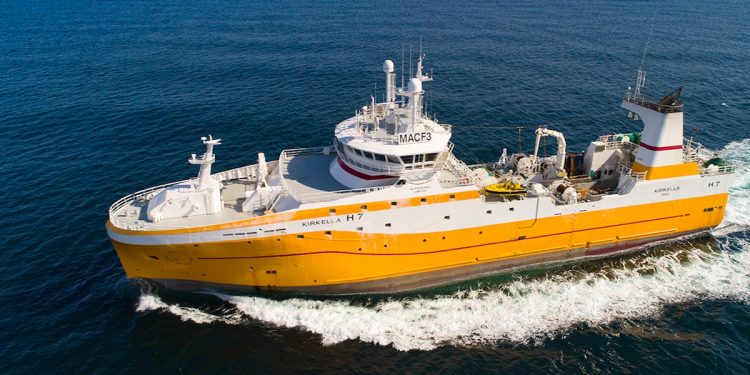 A no-deal Brexit could have disastrous consequences for the UK’s only distant water groundfish trawler operating primarily in Norwegian waters, unless an agreement could be quickly struck with Norway and the EU, allowing it to continue fishing.

Delivered earlier this year, UK Fisheries’ Kirkella is one of the most advanced fishing vessels of its kind in the world, with the bulk of its seafrozen catches from the Barents Sea going to the UK fish-and-chip market.

Crucially, Kirkella’s operations depend on agreements with Norway. These are agreements that are negotiated between Norway and the EU, and on day one of a no-deal Brexit the agreements under which the 81-metre factory trawler Kirkella operates would no longer apply to the UK.

‘If we can strike a deal with the EU then it should be business as usual, and we don’t ask for anything more than that. The real problem for us would be a no-deal Brexit, unless we can very quickly strike separate access deals with the Norwegians and others that will allow us to carry on fishing in the Barents Sea,‘ said UK Fisheries CEO Jane Sandell, commenting that there is the potential for the company to suffer severe damage if the situation is not resolved.

The company has a workforce of 150, including Kirkella’s 30 crew, who would stand to be made redundant if the trawler loses access to its usual fishing grounds – with no alternative fishing activities in sight.

The current 31st October deadline is approaching rapidly, and although UK Fisheries is making contingency plans, the options remain limited.

‘We’re as well prepared as we can be, but serious planning is almost impossible given the prevailing uncertainty,’ she said.

‘There have been some encouraging noises recently but we still don’t have any guarantees, so we need the politicians and negotiators to give this top priority if we are to continue bringing home sustainable cod and haddock after Brexit.’