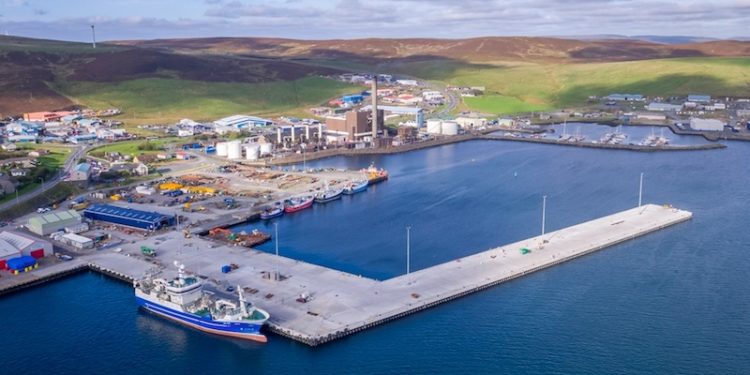 Construction work on Lerwick Harbour’s replacement whitefish market is scheduled to begin this month in a project that will more than double capacity for landings at the UK´s second largest fishing port. Following competitive tendering, Tulloch Developments Ltd A532;has been appointed main contractor by Lerwick Port Authority, with completion set for early 2020.

The £7.6 million investment by the Lerwick Port Authority is supported by £1.73 million funding previously confirmed from the European Maritime and Fisheries Fund and £587,000 from Highlands and Islands Enterprise. The Authority’s lender, Bank of Scotland, is providing the remainder of the funding package.

Design has been undertaken by Arch Henderson which will also manage the build project.

The four temperature-controlled/chilled bays will cover 1600 square metres, a significant increase over the present market’s 726 square metres. There will also more space for palletising fish and a 400 square metre chilled transport corridor to improve dispatch. The chilling system will be more environmentally-friendly and energy-efficient.

The location on Mair’s Quay, purpose-built in 2013, will provide improved access both by land for uplifting fish and by sea, including better-suiting landings at all states of the tide.

The existing market was constructed in 1975, extended and refrigerated in 1993, and it was further extended in 2009 to accommodate increased white fish landings. The electronic auction system was introduced in 2003.

‘We are committed to sustaining and developing the fishing industry in Shetland, as a key component in the islands’ economy, by providing the required, modern facilities. The replacement market’s design reflects detailed discussions with a range of stakeholders. It will deliver much-needed new facilities and a significant number of benefits to users. The overall effect will be enhanced quality of fish landed,’ said Lerwick Port Authority Chief Executive Sandra Laurenson.

The site is adjacent to the new L-shaped, deep-water Mair’s Pier, inaugurated last year, which provides more working area, while the dock shelters the market landing berths. Modern welfare facilities for all market users are also included in the development.

The combination of developments in the port’s Mair’s area will complete a hub for the fishing industry and increase co-ordination and co-operation of activities. First floor offices are to be built above part of the market for sector stakeholders, LHD Limited and Shetland Fish Producers Organisation. These offices, while incorporated into the overall building contract, are being funded separately by the companies which will own them.

Tulloch Developments has already been undertaking road access and car parking works under a separate contract which is now substantially complete. The water depth at the quay and approaches were pre-deepened to 6.2 metres during capital dredging in 2008.