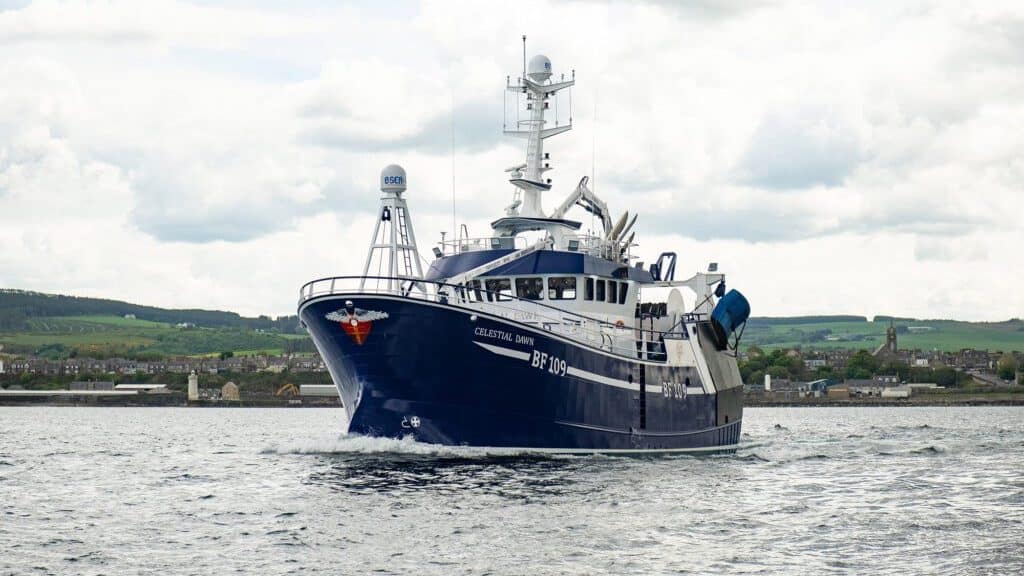 There’s nothing like a returning customer – and this isn’t the first time that George Hepburn and his partners have been to Macduff for a new trawler, as the previous Celestial Dawn BF-109 came from the same yard back in 2000.

The new Celestial Dawn, which will be fishing from Peterhead primarily for prawns on North Sea grounds, is the first of three sister vessels being built to the same entirely new design developed by Macduff Ship Design and Macduff Shipyards.

The second in the series is under construction already at the yard’s fabrication hall in Buckie, and work on the third is scheduled to begin later this year.

Work began on the new design in 2018, with the aim of developing a vessel able to operate on much the same lines to the previous Celestial Dawn, but with greater comfort for the crew and better fuel efficiency. Hull designs were tested by the Wolfson Unit in Southampton using CFD technology, comparing a design previously built by the shipyard for a similar type of operation and a new concept model for Celestial Dawn featuring increased waterline length, a gradual bustle forward of the propeller and a new stem design where the bulbous bow was not fully submerged but rather tapered gradually into the bow’s upper region.

The results indicated a significant reduction in hull resistance at test speeds of 8 and 10 knots, which have since been verified during Celestial Dawn’s sea trials with an average top speed of 10.50 knots.

The new design is broader, with a 7.60 metre beam against a 22.75 metre overall length. This means less internal ballast is needed, while creating more deck space, with benefits for the accommodation and catch handling areas.

The steel-hulled Celestial Dawn has a double chine construction, transom stern and a modern bow designed to cut cleanly through the sea with less energy. The mast and wheelhouse are built in aluminium.

Within the new concept hull design is a largely conventional Scottish-style trawler laid out with cabins, engine room, 650-box capacity fishroom and a large freshwater tank forward of the collision bulkhead below main deck level. The main deck has an aft shelter, galley/mess and side passage, catch handling area and a forepeak with a dedicated winch space.

Celestial Dawn’s owners opted for what has become practically a standard propulsion package, with a 2500mm fixed-pitch propeller powered by a 650hp Caterpillar C32 man engine via a Masson Marine W7400 reversible gearbox with 9.077:1 reduction ratio.

This is the ninth Macduff newbuild to feature this propulsion package, which has been shown to be both robust and adaptable, taking full advantage of wide operating speed range of the C32 to provide the flexibility to achieve full power from a fixed-pitch propeller both for steaming and trawling. Celestial Dawn also has a triple rudder system with the steering system from Scan Steering, and the propeller and nozzle supplied by Wärtsilä.

The gensets on board are Mitsubishis, with a pair of 98kW units each capable of delivering enough power for Celestial Dawn’s systems fitted by RD Downie. A dedicated Mitsubishi 6D24 powers a Parker hydraulic pump to run the hydraulics and a secondary hydraulic pump is run from a PTO on the main gearbox, providing a fallback option for running the winch systems.

The hydraulics and winches are supplied by the yard, with a triple barrel main trawl winch forward fitted with a Hagglunds compact CA210 motor. The two split net drums aft have two Hagglunds compact CA70 motor per drum, two bagging winches are driven by with Hagglunds CA70 motors, plus there are two small gear handling winches and a cod end winch. Thistle Marine supplied both the MFB8 landing crane and MBK13 powerblock crane, both mounted on a slew ring bases.

Cooling for all engines and hydraulics onboard are served by Blokland Non-Ferro box coolers.
The catch handling installation on Celestial Dawn’s main deck is built by the yard and Northeast Fabricators. A separate compartment on the main deck encloses the access to the fishroom and the ice plant room, with both the icemakers and the fishroom chiller system supplied by Airo-Tech Solutions.