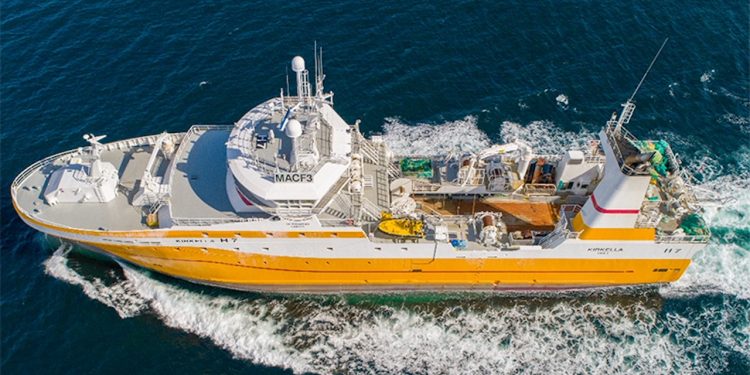 He pointed out that up to the end of 2020, Hull-registered factory trawler Kirkella was able to fish in Greenland, Norway and Svalbard for cod and haddock.

‘Today we have just one partial licence for Svalbard,’ he said.

‘The deal may be done with the EU, but there remains a huge opportunity for the Government to strike really good deals with non-EU states and repair some of the damage it has done to our industry. These deals need not be one-sided, but if Norway wants to sell us tariff-free salmon and Iceland wants us to eat their tariff-free cod, then they should expect to allow our boats to fish in their waters just as we have allowed French and Spanish boats to fish in ours.’

He commented that the deal with the EU has destroyed the myth that access to fishing grounds and market access could not be linked since negotiators directly traded UK rights to sell to European markets with the right of EU vessels to catch British fish.

‘This has well and truly given the lie to the political dogma that separated access from trade,’ he said, adding that there are opportunities that need to be pursued.

‘I attended a virtual meeting at which Steen Lynge, the Foreign Minister of Greenland, discussed the future of UK-Greenland co-operation. He clearly understood something that until recently the UK government seemed to have missed. Trade deals need to look at relations in the round, and in negotiations you may have to give with one hand in order to take with the other,’ he said.

‘As Steen Lynge told us, the UK takes 13% of all the fish Greenland catches and a whopping 50% of their prawns. Yet currently British boats can’t fish in Greenland waters, even though the Greenland government is fully expecting to give us a renewed quota if we ask for it.’

He also questioned why there are not opportunities for UK fishing in the Falklands.

‘Why should the British taxpayer not benefit from UK vessels being allowed to operate in the Falklands bountiful fisheries, as the Spanish do, when we collectively pay for the islands’ defence?’ Barney White-Spunner asked.

‘There is real opportunity here – both for the government to repair some of the damage it has done to fishers and to set the British distant water fishing industry on a new course. With new fishing opportunities will come new investment in boats and jobs in Hull and around the Humber; for every job on a boat comes multiple employment opportunities in the processing, logistic and retail sectors. It is there for the asking. But will the negotiators in Defra and the Department of International Trade actually work together to ask for what should be ours by right?’ he said.

‘Now we know that trade and access are linked, there’s nothing stopping them.’