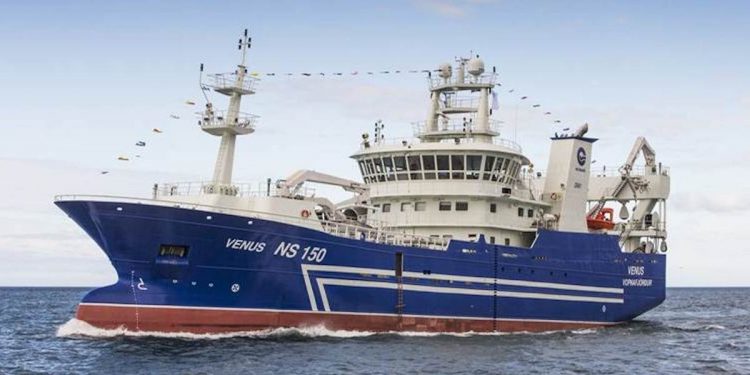 Iceland’s herring season off to a fine start

Brim’s pelagic vessel Venus was expected to dock in Vopnafjörður this afternoon with 1260 tonnes on board. The herring catch was taken in four hauls over 24 hours in the Héráðsflói Deep, which is around five hours’ steaming from Vopnafjörður off the east coast of Iceland.

‘This is out second trip on herring only, and before the weekend we landed 1360 tonnes in Vopnafjörður. In fact, we started with 600 tonnes of herring that we had taken at the tail-end of a mackerel trip, so we’ve caught 3200 tonnes of herring so far,‘ said skipper Bergur Einarsson.

‘It looks as if the herring had moved along the bank and then turned back instead of heading out into deeper water. This is all fine quality herring that’s ideal for production,’ Bergur Einarsson said.

According to Börkur’s skipper Hálfdan Hálfdanarson, the herring have stayed put on the same grounds.

‘We had these fish in five hauls in the inside of the Héráðsflói Deep. We didn’t tow for long and we weren’t in a hurry,’ he said.

‘The longest tow was two hours and the shortest was twenty minutes, and we gave ourselves time between hauls. You have to take care to not be taking too much. There’s a huge amount of herring in this area and it seems to like it there. It’s lovely herring, and larger fish than we had in the previous trip at over 400 grammes. There’s also no feed in the fish, so it’s excellent for production. We’ve been fishing practically outside our own back door in perfect weather today, with 47 miles to Norðfjörður when we had finished fishing. It doesn’t get better than that,’ Hálfdan Hálfdanarson said.