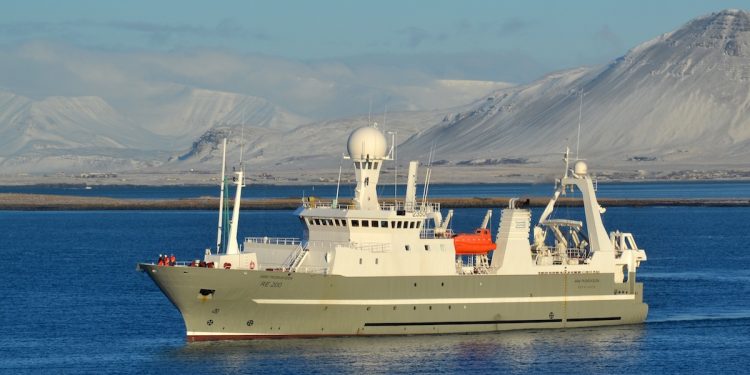 The Icelandic Marine Research Institute has recommended a zero capelin TAC for this winter’s fishery, following acoustic sampling carried out in September and October.

The Institute’s advice is set to be re-examined as a second survey will take place in January-February, allowing scientists to revisit and revise their recommendations. ICES will also examine the survey data and provide its advice on an initial TAC later this month.

The acoustic survey was carried out by research vessel Árni Friðriksson and Norwegian pelagic vessel Eros between 9th September and 21st October, covering a sea area extending from the East Greenland continental shelf from 75°N to 64°N, and taking in Greenlandic, Icelandic and Jan Mayen waters, as well as other northern areas.

According to the Institute, capelin were located over a wide area, with juvenile fish that are expected to form the bulk of the 2020/21 season furthest south and west, and mature capelin most noticeable off Greenland, east of Scoresby Sound. Only minor amounts of capelin were identified in Icelandic waters, with its distribution largely westerly, as it has been in recent years.

There was less capelin identified in the northerly survey areas, and nothing to be found north of 71°30’N.

The Institute states that the overall biomass is estimated at 795,000 tonnes, of which the maturing stock of two year and older fish is put at only 186,000 tonnes.

The adopted harvest control rule requires 50 billion individual fish before an initial TAC can be recommended. This is based on leaving at least 150,000 tonnes for spawning with a greater than 95% probability.