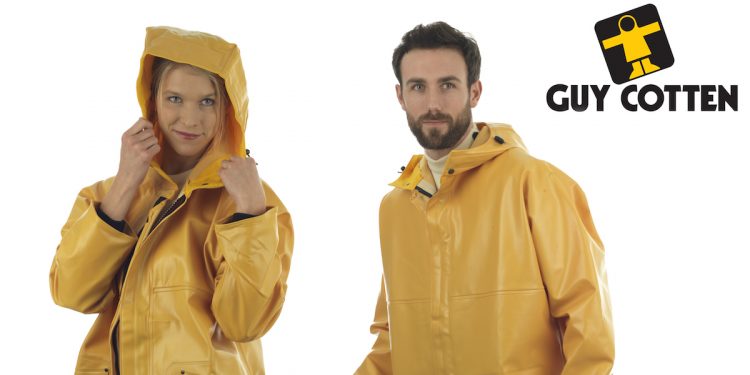 Guy Cotten selected to represent Finistère at Made in France exhibition

Guy Cotten’s iconic yellow Rosbras oilskin top has been selected as one of the products identified with the Finistère region of France for the Made in France exhibition, to beheld later this month at the Eylsée in Paris.

It has been through a few incarnations over the years, but the jacket has now been in production since 1966, with more than 15,000 produced over the last decade alone. Altogether, more than 600,000 have been manufactured.

Back in 1966 Guy Cotten was asked by a friend, Yves Mémery who headed the Rosbras-Brigneau sailing school, to come up with a practical jacket for use at sea that would replace the poor-quality jackets then on the market that relied on press studs to keep them closed. After a few evenings thinking it over, the first versions were delivered, and have been in use ever since. The use of a zipper and a double velcro flap were key to its success, and there is hardly a waterproof jacket of this kind anywhere in the world that doesn’t use this arrangement.

In the intervening years there have been further developments, including the patented Magic Hood that turns with the wearer’s head, high tenacity welded seams, visor hoods, integrated waterproof pockets and adjustable elasticated cuffs, although the original concept has remained unchanged.

‘It’s a great recognition of expertise that has been maintained in Brittany for more than 55 years,’ the company said.

Last year the company invested in a new 4500 square metre factory in Trégunc, along with investment in equipment and manufacturing processes, all of which has improved production capacity to allow the company to meet demand for its products. The new factory is almost independent in terms of power, generated by an array of solar panels on the factory roof, and a great deal of consideration went into selecting and installing electric terminals, maximising recycling and minimising waste.

Guy Cotten sees the selection of the Rosbras jacket to be displayed at the Elysée as a clear recognition of its success in maintaining skills and expertise in Brittany.