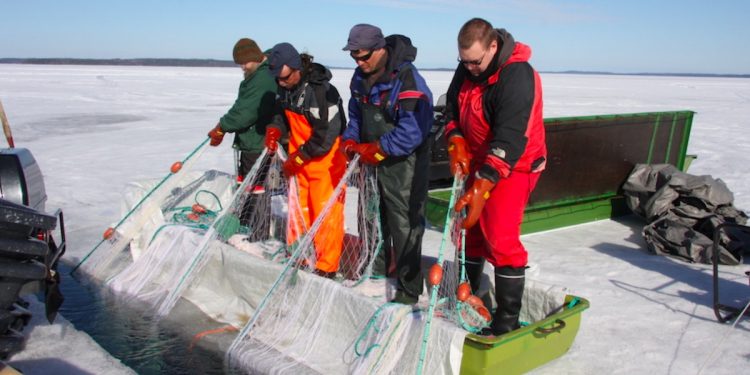 LIFE members from Snowchange Co-operative are working to raise the alarm. Melting ice is leading to the disappearance of their traditional seining fishery season.

In the 1960s the harvest could start in November and end in May, but fifty years on, the season could be reduced to just a few weeks between February and March, with dramatic consequences for the livelihoods of local communities.

Snowchange represents the Kesälahti winter seine fishermen and other fishing communities in North Karelia, and its members are calling on new European Commissioner for the Environment, Oceans and Fisheries, Virginijus Sinkevičius to take urgent action and establish specific support measures.

Writing to the Commissioner, the Snowchange members point out that their fishery goes back to 1300 AD. Today the co-operative represents fishermen working mainly on the North Karelian side of Lake Puruvesi.

‘We are members of Low Impact Fishermen of Europe. Puruvesi produces annually up to 450 tonnes of vendace (Coregonus albula), a salmonid schooling fish. Our fishery is mostly a winter ice-based seining. In the summer we use traps and seining. Many fishermen earn most of their yearly wages or a large part of them on the winter seining which is very sustainable and takes care of the northern lakes and addresses even eutrophication issues,’ states Snowchange President Tero Mustonen in the letter to the Commissioner.

The warming weather, which has now become normal, has hit the community hard, and the fishery that began in November fifty years ago has this year still not begun – and the fishermen are expecting to wait until February until they can get to work.

‘There is no ice, and warm weather destroys our possibilities for the winter-based fishery. Our fishermen gather daily at the Kesälahti fish base to repair gear and plan, and look at the Puruvesi lake which does not the ice we need for our fishery,’ Tero Mustonen reports.

‘The same phenomenon is also affecting the extremely endangered ringed Saimaa seal which is living on these waters. In the spring ice melts earlier, it used to last until mid-May – often we have to end the season at the end of March now.’

This winter the fishermen have already lost 6-7 weeks of their usual season. Working on the basis of a daily catch of 300kg of verdace fetching €3.50/kg, a seining crew of three are already facing lost earnings in the region of €44,000.

‘There are no insurance or loss coverage. We call on you to mobilise necessary assistance, for example through establishing a relief fund for our fishery to cover for the dramatic climate change impacts as a matter of urgency,’ Tero Mustonen said.