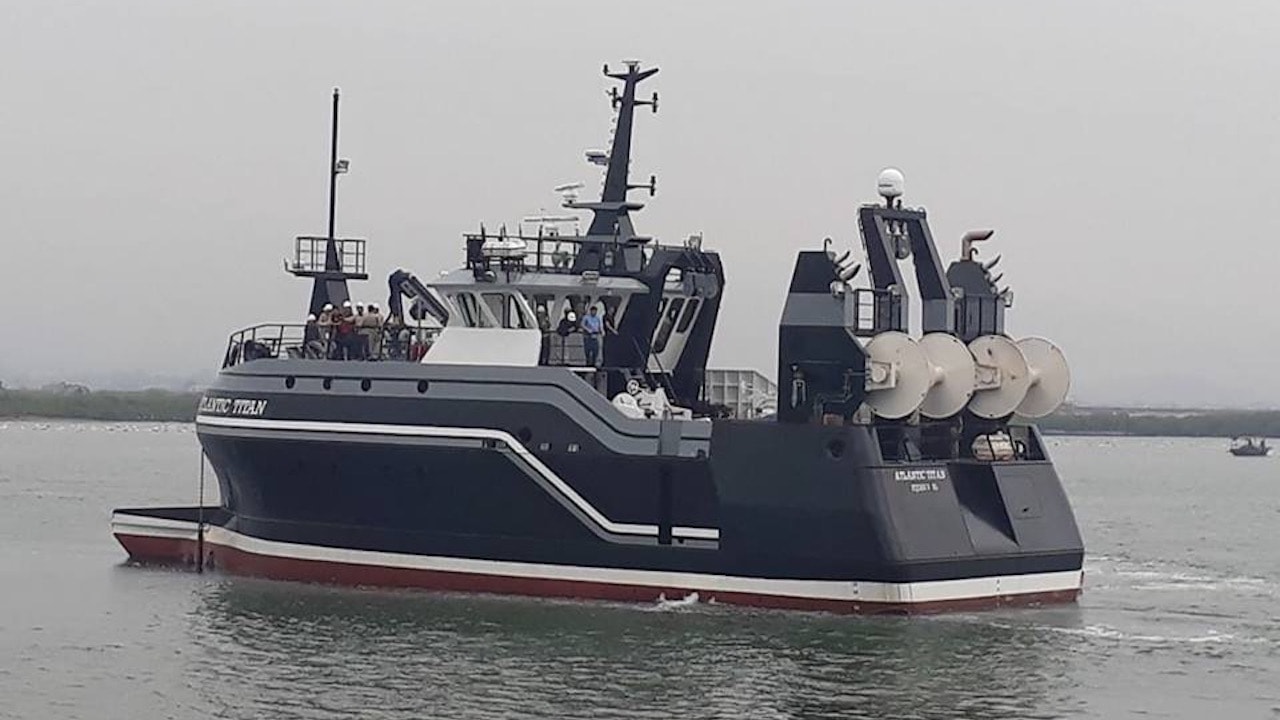 The new Atlantic Titan built for the Piercey family in Newfoundland travelled half-way around the world before sailing this week from St Johns in Canada for its first fishing trip.
Behind the new fishing vessel, designed to alternate crabbing with trawling for groundfish, are Scottish company Macduff Ship Design and Shipbuilding Asia, which handled Atlantic Titan’s construction in Vietnam, with the completed trawler shipped via the Panama Canal to Canada as deck cargo on a merchant ship.
The design of the 31.76 metre by 10.30 breadth Atlantic Titan brings traditional features and a distinctive design – plus cutting edge technology. The crabbing side of its activities are focused around the hauler on the starboard side behind a hydraulically operated hatch that makes it possible to close the main deck completely to switch to running a full factory deck with on-board freezing capacity for processing groundfish catches.

While crabbing, catches sorted and fed to the two 50,000 litres tanks to be kept in prime condition, while Atlantic Titan’s trawling layout is on the shelterdeck aft, overlooked by an aft wheelhouse control position. Bopp supplied the hydraulic deck equipment, including the net drums and 17-tonne pull trawl winches, with the trawl gear deployed via the stern ramp.
Catches are dropped through the stern hatch the processing deck below, which can be fully closed off. The catch handling deck can be configured for handling trawl-caught groundfish catches, with a reception hopper, processing line and three plate freezers and an RSW system supplied by Paumier Marine. Atlantic Titan is laid out for versatile operation, with a 160 cubic metre freezer hold, and the two RSW tanks can be reconfigured by removing panels to extend the hold space to 260 cubic metres. This fishroom space can be either refrigerated for frozen catches, or chilled for fresh catches with capacity for 170 x 660 litre Sæplast tubs.
Atlantic Titan has a 749kW Yanmar 6EY 17W main engine coupled to a Reintjes WAF 563 reversing gearbox with reduction ratio of 5.42:1, driving a 2000mm diameter fixed pitch propeller fitted in a nozzle, all supplied by Kort Propulsion. On sea trials this produced a healthy 10.50 knots. The hull form along with a high-lift rudder designed by Macduff Ship Design and bow thruster also supplied by Kort propulsion also gives Atlantic Titan the excellent manoeuvrability required for the fishing day to day operations. Bilge keels are fitted for roll reduction.
Accommodation comprises three 4-berth cabins and two single berth cabins as well as WC facilities, all positioned on the shelter deck below the wheelhouse. At main deck level forward there is a large mess and lounge area. The galley is accessed from the mess with separate provisions store and is fitted out to a modern and high standard with commercial quality equipment.