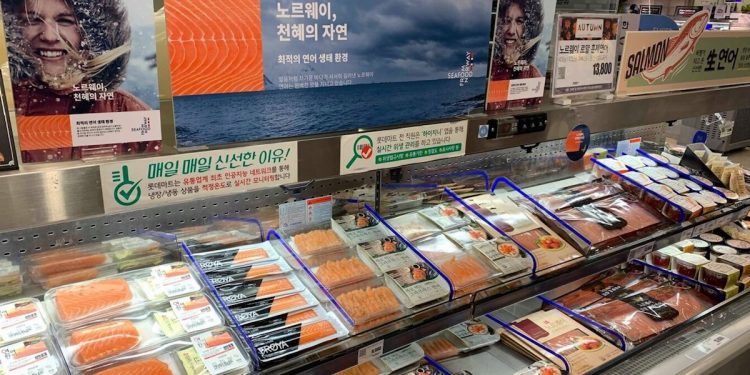 Norwegian producers saw a hefty drop in exports during August, attributed to weaker demand, among other causes.

‘The reason for lower demand is complex, but holiday season in Europe and reduced restaurant consumption is certainly part of the explanation,’ said Tom-Jørgen Gangsø, Director of Market Insight and Market Access with the Norwegian Seafood Council.

August seafood exports from Norway were valued at NoK7.3 billion, a NoK1.2 billion drop compared to August 2019, with reduced cod and salmon exports the largest contributors to the drop.

In addition, the Chinese market has proved to be slower this year, with salmon exports to China substantially down.

‘The Chinese salmon market has been affected by two waves, first the eruption of covid-19, and then in connection with the so-called incident at a food market in Beijing in June and subsequent media cases about corona and seafood,’ said Victoria Braathen, the Norwegian Seafood Council’s fisheries envoy to China.

So far this year, Norwegian salmon exports have a total volume decline of 28% and a decline in value of 32% to China.

‘While the first wave affected the restaurant and hotel market, the second wave has had a broader effect on the market. We expect demand to pick up again over the autumn,’ she said.

The EU is becoming an increasingly important market for Norwegian salmon. In just one year, the EU market share by value of Norwegian salmon exports has increased from 69 to 74%.

‘France is one of the markets that has taken a U-turn in the corona period. When the country closed down, the French were only allowed to shop in small convenience stores. The country has now opened up, and this has an effect on salmon exports. It also helps that the grocery chains have started running price campaigns on salmon to attract customers back,’ said Norwegian Seafood Council seafood analyst Paul T. Aandahl.

The Norwegian Seafood Council’s figures show an increase in consumption of fresh salmon in France of 20% in August.

‘Even though France has now opened up, we see a strong trend towards continued increased home consumption. Norwegian fresh salmon has a strong position in the French grocery trade, and with continued high domestic consumption, this will intensify. This autumn, the Seafood Council is running a large media campaign towards French consumers, so it will be extra exciting to follow developments,’ commented Trine Horne, fisheries envoy to France, with the Norwegian Seafood Council.

While there has been a growth in the volume of fresh whole cod exported, there has also been a drop in prices.

‘There are normally low volumes of fresh cod at this time of year, and even though there is growth in volume, there are lower volumes now than in August 2018,’ said seafood analyst Ingrid Kristine Pettersen

‘For frozen whole cod, we have experienced steadily falling prices since April, both in Norwegian kroner and in other currencies. The explanation for this is the loss of the restaurant segment and overall declining demand in the markets.’