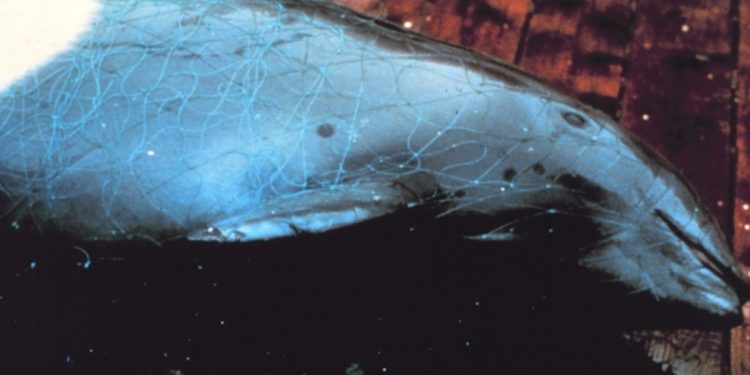 Indian Ocean dolphin populations may have declined by more than 80% since 1950, and a study conducted by an international group of scientists including OPAGAC deputy manager Miguel Herrera attributes this to the use of drifting gillnets. The study estimates that 4.1 million small cetaceans, primarily dolphins, have been caught as by-catch in these fishing gears between 1950 and 2018.

The study states that the average abundance of dolphins today is 13% of what it was in 1980, despite restrictions following the 1993 United Nations prohibition on the use of drifting gillnets.

The fleets using drift gillnets catch 34% of the tropical tuna that comes from the Indian Ocean. This more than any other type of fishing method, including purse seining.

The Spanish tuna fleet uses purse seines, which have registered zero marine mammal by-catch deaths at all in recent years. According to the study, the fleets of nine countries account for approximately 96% of all cetacean by-catch in tuna gillnetting in the Indian Ocean. They are, in order, Iran, Indonesia, India, Sri Lanka, Pakistan, Oman, Yemen, the United Arab Emirates and Tanzania.

The main problem with drift gillnets, the study states, is that they vary between 100 metres and over 30 kilometres in length and between 5 metres and over 20 metres in depth. For this reason, in 2017 the IOTC passed a resolution prohibiting the use of drift nets over 2500 metres in length. The ban also extends to Exclusive Economic Zones as of this year. The European Union joined the UN’s 1993 prohibition of drift gillnets with its own prohibition for tuna fishing in 2002 and for the entire EU fleet in 2015.

The study’s authors are calling for improved management and control by flag states and the IOTC, fundamentally because of the lack of data on the activity of the majority of the gillnetting fleets. Specific measures recommended include setting gillnet fishing effort limitations, monitoring to ensure that gillnets are no more than 2500 metres in length, and applying more exhaustive control to onboard activity through a combination of human observers and electronic monitoring solutions.

They state that unlike drift netting, tuna seining registers practically zero by-catch mortality in the Indian Ocean, according to a study the Spanish fleet presented to the IOTC in 2018. The study shows that in recent years purse seine fishing has contributed nothing to cetacean mortality, 0.15% to the mortality of sharks, skates and rays and less than 0.3% to the mortality of turtles.

According to OPAGAC, these figures are due to the fleet’s having taken management measures that prohibit seining for tuna associated with cetaceans and having voluntarily applied the Good Practice Code verified by the AZTI institute of technology. The code is part of the Fishery Improvement Project (FIP) the WWF kicked off in 2016, and it has helped reduce shark mortality by around 10% and increase turtle survival by nearly 100%.

‘The importance of developing coastal countries’ fleets in the Indian Ocean, their big catches and the lack of control mechanisms are the reasons the proliferation of drift nets has not been stopped,’ said OPAGAC deputy manager Miguel Herrera.

‘Turning this dire situation around will require extremely tight control plus investment in alternative fishing methods to get rid of the gear, which is so harmful to the marine environment. In 2023 it will have been 30 years since drift nets were prohibited by the UN, and it would be quite grave for the international community if measures like this were to continue to be ignored.’