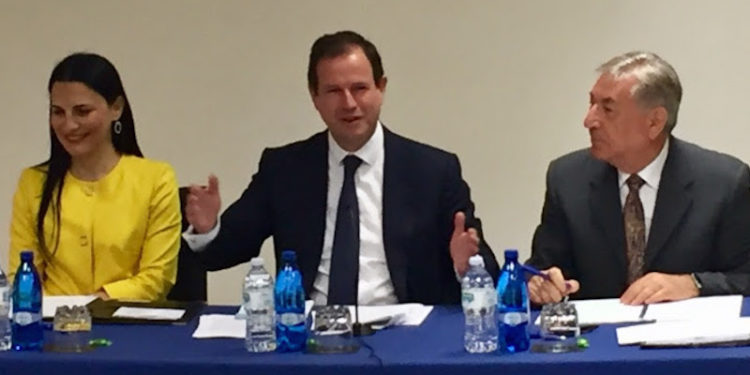 A strong commitment to reverse the fisheries situation in the Mediterranean by adhering to the ambitious targets set in the Malta MedFish4Ever Declaration was underscored at Europêche’s general assembly held at Koperattivi Malta headquarters.

Karmenu Vella, EU Commissioner for Environment, Maritime Affairs and Fisheries and Dr Andreina Fenech, Director General, Ministry for Sustainable Development, Environment and Climate Change, attended as guests of honour with both the Commissioner and the Director General voicing their optimism over the positive trend in European fisheries, and listening to the industry’s concerns regarding current developments on fisheries policies, particularly the landings obligation.

All parties showed a strong commitment to reverse the situation in the Mediterranean by adhering to the ambitious targets set in the Malta MedFish4Ever Declaration.

‘I am very pleased that the Commission and the Council Presidency at their highest level are actively engaging with the fishing sector and have shown a huge eagerness to continue this open door policy into the future,’ he said.

A range of issues were covered during the course of the meeting.

Europêche members informed the EU representatives on the imminent impact of the landings obligation, explaining that the phasing in of the most problematic species has been scheduled for 2019. Member states are therefore not reporting any difficulties with the implementation so far.

The made it plain that the problems are huge and this will become apparent in 2019 in a dramatic manner as the quota allocation fails to deal with the complexity of mixed fisheries and choke species. Even with the flexibilities provided by the CFP, fish will remain uncaught, reducing food supply and vessels will either be tied up or go bankrupt. The sector demanded that policymakers address these issues before the 2019 ‘big bang’ kicks in and the possibility to exclude certain species from the TAC management system.

All parties acknowledged the need to regionalise the decision-making process in fisheries through multiannual management plans. However, members of Europêche demanded simpler framework regulations from Brussels, covering the essential elements which would be developed later through regionalisation.

Concerning the technical measures regulation, members welcome the decisive shift away from prescriptive micro-management, although identified a number of concerns related to the introduction of certain measures such as unworkable mesh sizes and unrealistic metric targets.

As regards the external dimension of the CFP, members of Europêche welcome the proposal for a Regulation on the external fishing fleet. However, the proposal introduces an ineligibility criterion to apply for a fishing authorisation in cases of serious infringements which sets a double penalty.

This could put at risk the activity of more than 700 large vessels and 10,000 direct jobs.

In addition, the European Parliament has introduced a provision which may violate confidential data, since it would disclose private information of operators and beneficial owners of fishing vessels.

The sensitive situation between EU-Norway concerning snow crab was also dealt with. EU representatives assured the meeting that they are closely working with the Norwegian authorities to find a suitable solution for all parties involved which would not affect the current bilateral fisheries agreements.

On the subject of international governance, Europêche members expressed their full commitment to the fight against IUU, marine garbage and strengthening international compliance with existing legislative frameworks. They emphasised that the high seas are not the Wild West and for decades have been adequately regulated by RFMOs, while recognising that there is room for improvement.

While there may be a need for the new UN implementing agreement on the conservation and sustainable use of marine biological diversity of areas beyond national jurisdiction for many sectors, such as biotechnology, this is not the case for commercial fishing which is heavily regulated through many sectoral instruments.

As for the Mediterranean all parties called for a concerted effort to repeat the success stories of northern waters. ‘The EU fishing sector endorses the Malta MedFish4Ever Declaration,’ Javier Garat said.

‘We trust that this ambitious action plan helps reverting the delicate situation of the Mediterranean stocks. The industry supports the adoption of adequate management measures which may include the reduction of fishing effort, improvement of selectivity, introduction of technical and conservation measures. However, we are against the establishment of a TAC&Quota system due to the specifics of the Mediterranean fisheries, which includes thousands of small-scale vessels and complex mixed fisheries in which numerous stocks are caught together,’ he said.

‘While we may disagree on the adoption of certain measures, in particular the approach adopted for small pelagics in the Adriatic, we fully share the objective of rebuilding fish stocks in the Mediterranean as it already happened with bluefin tuna.’

Members underlined the importance of the social dimension of the CFP and invited Commissioner Vella to participate in the social dialogue committee for fisheries to continue strengthening safety, health and working conditions at sea. Europêche also recognised the dangers of marine litter and will put forward a commitment to step in the fight against this threat and contribute to the ocean clean-up.