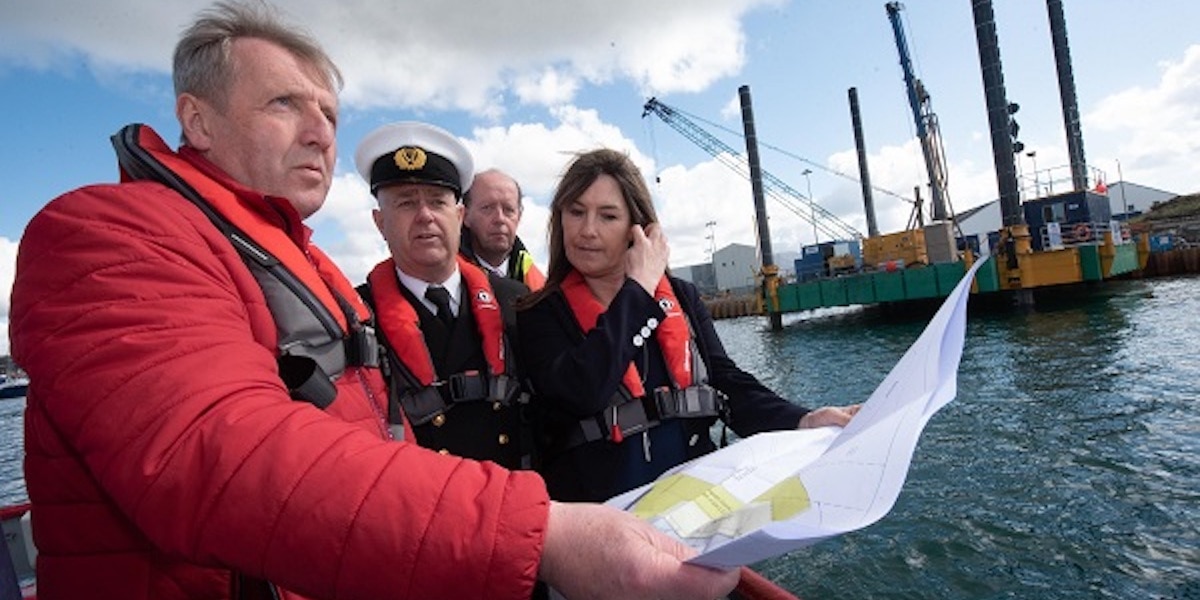 Ireland’s Minister for Agriculture, Food and the Marine, Michael Creed T.D., officially opened the new Harbour Administration building in Castletownbere, and took the opportunity to inspect progress on the €23.5m, 216 metre long quay extension project and associated works on Dinish Island as part of Project Ireland 2040.

‘This building provides fit for purpose offices whereby harbour users can carry out their business with the Harbour Master in a professional and modern space. The building will be shared with the Sea Fisheries Protection Authority facilitating a more efficient and effective delivery of services making it a one stop shop for harbour users,’ the Minister said.
Castletownbere has one of the largest natural harbours in the world, formed by Dinish Island to the south (hosting most of the fisheries infrastructure and processing activity) and the town of Castletownbere to the north. Castletownbere Fishery Harbour Centre is one of Ireland’s major fishing ports and is Ireland’s largest whitefish port.
‘The Harbour Administration Building provides a new focal point in the town and forms part of a wider and ongoing integrated Harbour Development programme. It demonstrates a commitment to rural development by this Government and spearheads further improvements in the town proposed by Cork County Council,’ Michael Creed added.
‘I took this opportunity to inspect progress on this large investment in the seafood industry in Castletownbere, and I am delighted to say that it is coming in within budget and ahead of schedule,’ he said, commenting on the EMFF co-funded €23.5m, 216m quay extension on Dinish Island.
The quay extension project in conjunction with the new Harbour Administration building forms part of a wider Harbour Development programme. The new extended quay will almost double the landing space available to fishermen, alleviate current congestion issues and provide for the possibility of increased fish landings and opportunities for further economic diversification compatible with the fishing industry.
Between 2010 and 2017 the value of fish landings into Castletownbere increased by 275%, from €29.9m to €112.3m, with volumes increasing by 91% over the same period from 19,030 tonnes to 36,446 tonnes.
‘When completed, the new quay will future proof the seafood sector in Castletownbere, will significantly drive forward the fishing industry and local economy on the Beara Peninsula and allow for a major expansion of the seafood support sector and other marine related industries in the South West,’ Michael Creed said.
‘Taken together, these two projects are testament not only to this Governments support for the Castletownbere fishing industry and the ongoing development of the wider seafood sector, but also to our commitment to the social and economic development of rural coastal communities. When fully completed, Castletownbere will have facilities on a par with the best in Europe, and will be open for further economic expansion providing the environment for the creation of much needed local jobs.’