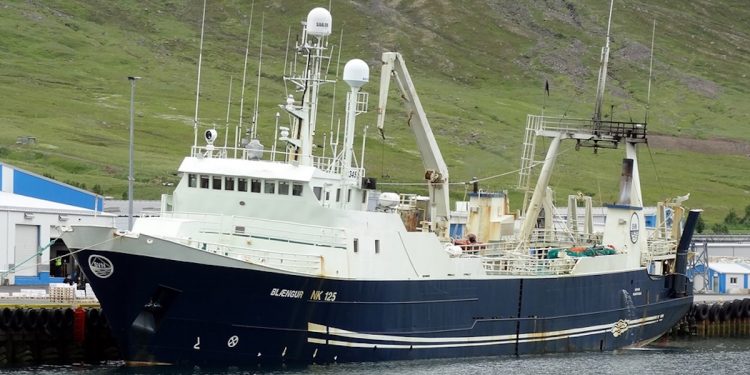 Síldarvinnslan’s factory trawler Blængur has landed a record trip after spending 40 days fishing in the Barents Sea, and is now back at sea on home grounds.

Blængur’s crew worked through a 1430 tonne green weight of fish during the trip, with heavy fishing practically the whole time to process 1330 tonnes of cod and around 100 tonnes of haddock.

According to skipper Theodór Haraldsson, they worked mainly on the Skolpen and Kildin Banks, until a large sea are was closed off to allow for military exercises.

‘We shifted south to the Goose Bank, only 50-60 miles from Novaya Zemlya,’ he said, adding that the weather was kind to them the whole time – right up until Blængur was almost home.

With its catch landed in Neskaupstaður, Blængur is back at sea, this time concentrating on Greenland halibut and saithe.

As well as landing its full fishroom of cod fillets, what also attracted attention was the amount of garbage that was put ashore to form two large heaps of old fishing gear, ropes, crab traps and a variety of metal garbage on the quayside.

‘This was all junk from the Barents Sea that came up in the trawl. There seems to be endless garbage on the seabed there, and much more than we see in Icelandic waters,’ Theodór Haraldsson said.

‘We keep everything that comes up, put it to one side and bring it ashore for disposal. It’s many years since Icelandic fleet stopped dropping all its garbage in the sea and with greater environmental awareness, everyone started bringing back all the junk that comes up in the gear. Icelandic fishermen respect the ocean, as is only right,’ he said.