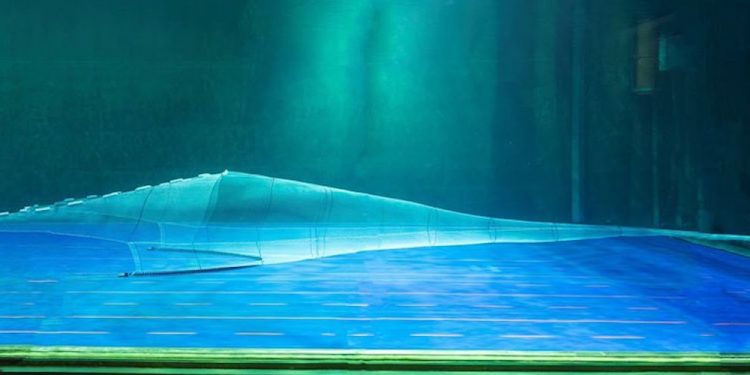 Vónin’s Bacalao trawls have been a longstanding part of the company’s gear inventory, and while the original design has been refined and optimised over the years as new materials and technology have become available, the basic Bacalao design has remained in place.

Instead of another round of upgrading this tried-and-tested trawl design to achieve more headline height, Vónin’s gear designers have gone for something new and have come up with the Zenith trawl after a process of simulation, flume tank testing and sea trials with the full-scale prototype of the new trawl.

Pair team Polarhav and Stjørnan were selected to try out the Zenith trawl – fishing the standard Faroese pattern of alternate hauls with each trawler’s gear so that Stjørnan stayed with their standard 720 Balacao and Polarhav had the new 700 mesh Zenith trawl on board.

This arrangement made it possible to compare the two sets of gear with reasonable accuracy over several trips.

‘Even though the Zenith trawl has 20 fewer meshes in the fishing circle, it has a higher headline height, generated by optimising cutting rates and hanging ratios,’ The Zenith trawl is constructed with the top sections made in Vónin’s own Fortis netting.

In reality, the fishing trials with Polarhav and Stjørnan showed that the Bacalao’s headline sits at around 7-8 metres, but the Zenith trawl has a headline height of up to 10 metres, without losing bottom contact and with slightly more spread – and the warp tensions for the two trawls are the same.

According to Polarhav’s skipper, the new trawl catches well, and it catches fast when a large mark of saithe is encountered, while also being stable on the seabed in all weathers and with minimal damage.

‘The pair teams in the Faroes mainly target saithe and it’s noticeable from the figures that the Zenith trawl performed well, and also did better on haddock – which has to be due to the longer headline and better height – while there was slightly more cod and ling in the Bacalao gear,’ Jan Klein said.

Two other pair teams have now switched from conventional Bacalao trawls to the new Zenith trawls, while factory trawler Gadus also has a Zenith on board, aiming to use this to be better on haddock in the Barents Sea.

The pair Lerkur and Rókur did the same as Polarhav and Stjørnan where one of the trawlers switched to Zenith and the other got a new Bacalao. On the first trip on redfish the trawler with the Bacalao caught 30 tubs of redfish while the one with the Zenith trawl caught 90 tubs.

‘So the first results with the Zenith trawl are looking very promising,’ Jan Klein added.