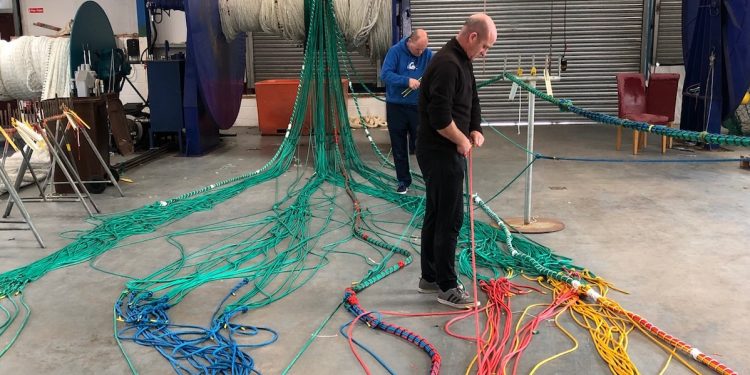 Gearing up for tuna

Feedback from Swan-Net Gundry (SNG) customers has been highly positive as the company’s new design concept of incorporating more mesh into the side wing panels of pelagic trawls for herring, mackerel and horse mackerel has returned impressive results.

This arrangement is designed to reduce the possibility of fish escaping through the sides of the trawls as, with current traditional designs the fish can escape through the side gaps. But by now incorporating extra mesh in the wings means closing this exit route and, importantly, this process does not alter the opening of the trawl.

At present the gaps in the side wing area can vary in length, but can range from 30 up to 250metres and SNG have addressed this problem with the design of two versions using the new ‘closed sides’ concept – one for pair trawling and the other for single boat trawling.

When vessels are working as a pair team, the SNG trawls are designed with the side wing panels filled out with extra mesh and finished with a short side rope which still allows the trawl to have the standard conventional finish.

And similarly, for single trawling, SNG have filled out the side wing panels with the extra mesh but also with the wing-end finish on the trawls built to incorporate two extra bridles – which changes the bridle arrangement from the standard two bridles each side to four.

This arrangement, by adding extra bridles, closes the sides of the trawls all the way along which reduces the area of potential escape routes.

The two options above can be used in either single or pairing as pair trawl teams can see the benefits with using the extra bridles in their standard setup will still remain user-friendly when passing over the lug ends of the bridles from one vessel to the other.

With this year’s albacore tuna season to start soon, SNG will have a combination of new trawls and modified trawls with this new design concept. SNG believes fishermen will see significant improvements in the trawl performance and catch success rates.