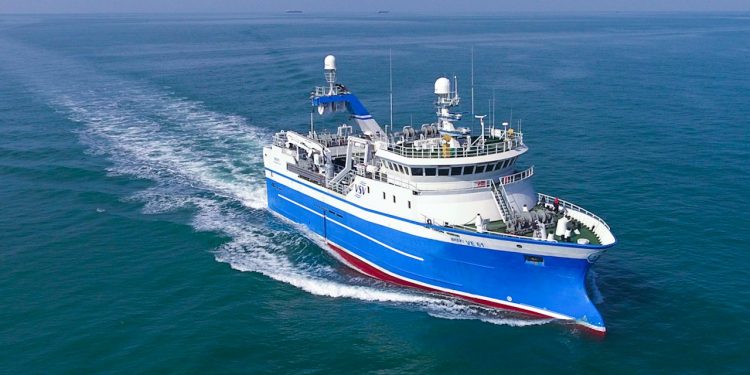 Westman Islands fishing and processing company Vinnslustöðin (VSV) is making ambitious plans for a new vessel to replace some of its older tonnage, and for new processing capacity ashore to be built in stages, replacing its existing buildings.

The plans were presented recently at a shareholders meeting, during which it was also announced that the company’s 2021 results were the best in its history, with profits of €15.1 million on a €137 million revenue, 75% up on the previous year. The capelin fishery, and the activities of subsidiary companies Huginn and Marhólmar accounted for the bulk of this growth.

Preparations are already being made for a new building to replace the current groundfish processing facility, to be completed in stages so as to interrupt production as little as possible. The plans were presented by chairman of the VSV board Guðmundur Örn Gunnarsson, and he also presented ideas for a new vessel to replace existing vessels Brynjólfur, Drangavík and Kap II.

He stated that the intention of the board and management is that this new vessel should be designed for maximum energy saving, and with options for running on methanol – although he commented that current regulations at present present a barrier to building such a vessel that could operate across the same coastal areas as the current three vessels.

‘Our most important reference in respect of ideas for a new vessel is the experience of operating Breki, and the fact that its slow-running, large-diameter propeller has resulted in a fuel saving of 40-50% for every kilo of fish landed,’ he said, adding that Breki, which was built for VSV in 2018, has a 4700mm propeller, when a standard arrangement would be for a 3000mm propeller.

‘Vinnslustöðin reduced its carbon emissions significantly by bringing in Breki and intends to continue on this journey by renewing its capacity for coastal waters. But for that to happen, Parliament will have to change legislation, and I don’t expect the authorities to respond positively to this request,’ he said.

‘Environmental considerations are of great importance, and if rules and regulations need to be changed to support environmentally-friendly fisheries, the authorities and the judiciary should not be a hindrance to this.’