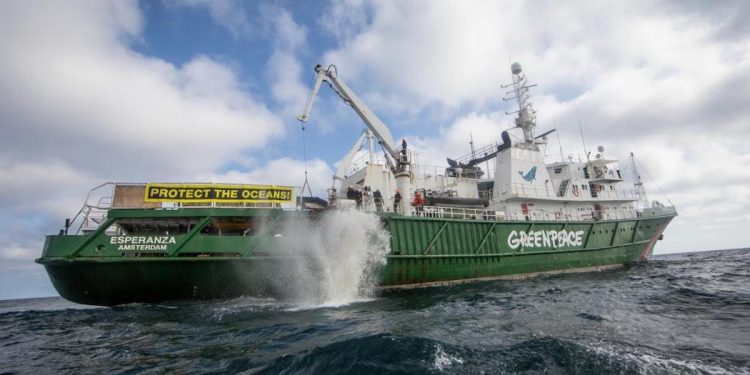 Dutch fishermen’s association VisNed has filed a formal complaint against Greenpeace following its latest stunt in dropping boulders on Dogger Bank fishing grounds. VisNed states that contrary to Greenpeace’s claims, there is no illegal fishing in the area.

The latest Greenpeace boulder publicity stunt, the latest in a long series of these going back a couple of decades, has been widely condemned by fishermen’s organisations – with many pointing out that fishing vessels are pursued relentlessly for the slightest infringement, while Greenpeace appears to be able to carry out clear infringements of the law (including the UK’s Merchant Shipping Act) without an interference from the authorities.

VisNed’s spokesman pointed out that boulders on fishing grounds represent a clear danger to fishing vessels and their crews.

‘Contrary to what Greenpeace claims, fishing on the Dogger Bank is not illegal. Procedures are underway to protect areas, and Greenpeace, like everyone else, has to wait for this,’ he said.

‘The dumping of stones is prohibited under the OSPAR convention, an international convention aimed at protecting the environment. To carry out dumping, including of natural materials, permission is required from the flag state of the vessel concerned and Greenpeace ship Esperanza sails under the Dutch flag. On this basis, VisNed has filed a complaint against Greenpeace. It is now up to the Public Prosecution Service to investigate the case.’

In the UK, DEFRA has made a lukewarm response to the Greenpeace actions on the Dogger Bank.

‘The MMO tracks the movement of all fishing vessels over 12m in English waters, 24 hours a day, through satellite technology. It also deploys aerial surveillance, and co-ordinates intelligence from third party sources – detecting where and when illegal fishing is suspected,’ DEFRA states, and declined to comment on specific allegations of illegal fishing activity, but confirmed that breaches of marine legislation are being investigated in regard to the laying of boulders in the Dogger Bank SAC.