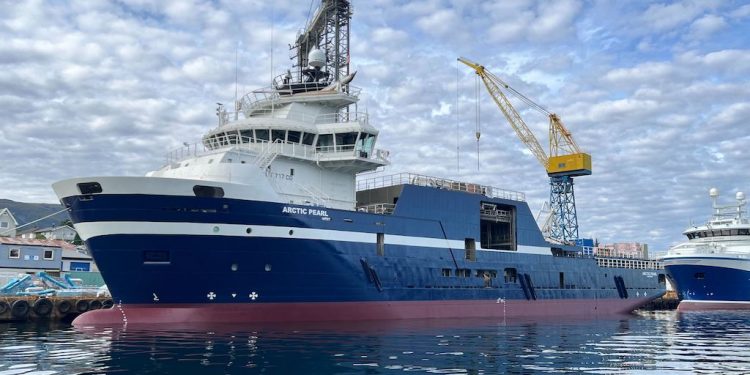 Vision and control for sustainable scalloping

A unique scallop harvesting venture has been in preparation for a while now, and operators of Arctic Pearl are ready to start fishing in the Barents Sea later this year, using technology developed by Scantrol and Deep Vision.

The backdrop to this venture goes back to a ban on dredging for scallops in Norwegian waters that has been in place for more than thirty years, on the grounds that heavyweight fishing gear does significant damage to the seabed. Since then, stocks of scallops in these northern waters have remained untouched.

Pioneering company Ava Ocean saw the potential, but needed to take a very new approach to harvesting. The company has been working to develop and test its technology since 2016, and has also been outfitting a former offshore vessel, now renamed Arctic Pearl, as the harvesting platform for the gentle and selective harvesting methods that are the result of several years of testing, research and development together with SINTEF and the Norwegian Institute of Marine Research.

This is a new patented technology for documented sustainable harvesting methods for the seabed. Shells can be identified, selected, and sorted without destroying the surrounding flora and fauna.

‘We are proud and excited to supply our vision and control systems for this important and ground-breaking project,’ said Espen Karlsen Eik, R&D Manager at Scantrol, which has been instrumental in developing the new harvesting technology.

The two scallop harvesters are controlled by Scantrol’s standardised solution for monitoring and control together with mTrack AHC Controller. These also use Deep Vision cameras to take images and videos of the seabed. All images will be used for scientific purpose in a project directed by SINTEF.

‘Ava Ocean has challenged us to make a control system that combines Active Heave Compensation (AHC), Trawl Control and Deep vision catch identification. We have had the pleasure of playing a central role in this pioneering project,’ says Scantrol managing director Helge Hammersland.

‘It was important for Ava Ocean to connect with the most experienced and preferred control systems suppliers for this unique catch operation,’ commented Ava Ocean CEO Øystein Tvedt.

‘We already knew Scantrol and trust their high-quality products. The collaboration with Scantrol and Deep Vision was established early in the process.’

The combined control system will be operated on Ava Ocean’s vessel Arctic Pearl.

‘The patented technology will initially be used on board the Arctic Pearl, but the potential for this technology is global, and also for other species on the seabed,’ said the company’s head of subsea Bjørn Roppen