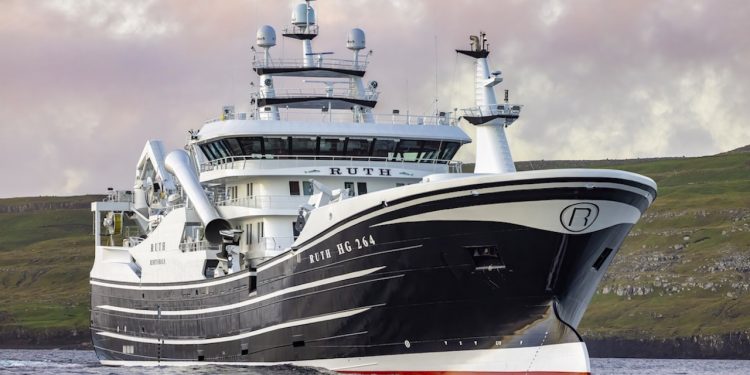 Turned away the SFPA way

Killybegs has witnessed the bizarre spectacle of a high-tech fishing vessel, its tanks loaded with a human consumption-standard catch, taking its fish elsewhere after a demand by SFPA that the catch be landed over a weighbridge instead of using the pierside weighing system.

Danish pelagic vessel Ruth had intended to land its blue whiting to Killybegs processor Sean Ward Fish Ltd, but the insistence of the SFPA that the catch be landed via the antiquated weighbridge system would have left the fish fit only for lower value fishmeal.

‘Today has been an extremely dark day from the Irish fishing industry, as we witnessed the Danish vessel Ruth leave Killybegs Harbour loaded with blue whiting after failing to land its catch at the pier, despite frantic efforts made for common sense to prevail and for the catch to be landed at Sean Ward Fish Ltd,’ said Brendan Byrne, CEO of the Irish Fish Processors and Exporters Association, commenting that there is a simple issue at stake of parity with other EU states.

‘All other member states can weigh fish on identical equipment to what we have, same model with the same certifications. But we are not afforded that right – we are subjected to unfair and disproportionate rules or a case of over-interpretation of these rules,’ he said.

‘Danish vessel Ruth was not given the option of using the pierside weighing scales, it was offered the weighbridge only, and with a catch of blue whiting which is particularly prone to damage and loss of quality once handled without proper separation of fish and water, this was effectively consigning a perfectly good catch of fish which is fit for human consumption to fish meal production.’

This bizarre situation has arisen due to a change by the SFPA in its own rules on 6th March this year.
Ireland currently operates under an interim or conditional control plan until the 30th April. Since April 2021, all landings in Killybegs have used the pierside weighing system, purposely built for precision weighing and separation of water, and run by an independent company not affiliated to the fishing industry.

In January of this year, permits were restored to weigh in factories after transport, with only monitored landings taking place on the pier, when it was confirmed by the SFPA that monitored landings could use the pierside for bulk pelagic landings – until the SFPA withdrew that permission on the 6th March this year, which has resulted in Ruth steaming away to land its catch of blue whiting elsewhere, while processing staff were stood down and sent home.