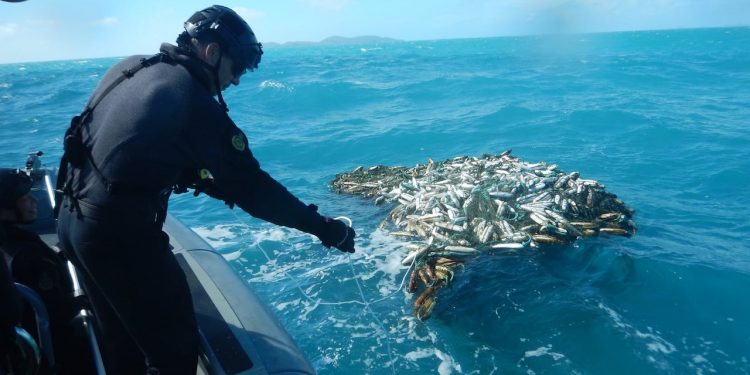 Minister for the Environment Sussan Ley said the trial of a tracking device has allowed the two such floating death traps to be safely retrieved.

‘We are thrilled by the success of this first GPS tracking trial and look forward to continuing to tackle ghost nets head on,’ Sussan Ley said.

‘The two foreign ghost nets were retrieved from locations near Badu Island and Possession Island in the Torres Strait, and have now been safely unloaded and disposed of in Cairns. The voyage also picked up parts of a fish aggregating device from the ocean east of Cape York including buoys, netting and bamboo.’

An ABF surveillance aircraft located the larger of the two ghost nets 10 nautical miles north-north-west off Badu Island in the Torres Strait. Officers on board an ABF patrol boat then proceeded to successfully attach a tracking device to the ghost net.

‘When nets are first spotted it is not always possible for them to be immediately retrieved, as they can sometimes weigh up to four tonnes and span a length of almost one kilometre,’ Sussan Ley said.

‘Improving our ability to detect and retrieve ghost nets through targeted tracking technology is key to the Government’s approach to protect our ocean and the species that live in it.’

The tracking trial comes as the CSIRO marine debris research team completes the most comprehensive analysis of aerial survey data of ghost nets in the Gulf of Carpentaria to date, with the study also funded under the Government’s Ghost Nets Initiative.

This study highlights that the Cape York Peninsula in Queensland and south of the Gove Peninsula in the Northern Territory are key hotspots for ghost nets and that the number of nets has increased over time, building on the important work many groups are doing to collect data on the ground.

Assistant Minister for Forestry and Fisheries Jonathon Duniam said the Ghost Nets Initiative is important for the future of marine environments and the Australian Government will continue to promote sustainable fishing.

‘While our domestic fishing industry is renowned globally for its sustainability and proactive in mitigating the risk of gear loss, it is harder to tackle the issue of foreign fishing nets lost or discarded outside our marine area,’ Jonathon Duniam said.

‘This new tracking trial will make it easier and more efficient to retrieve foreign nets, reducing marine life being caught, trapped or killed as they continue to indiscriminately fish in Australian waters.’

The Ghost Nets Initiative received $14.8 million in funding in the 2020 Budget and is to be delivered by Parks Australia over the next three years, in partnership with other government agencies, Indigenous ranger groups and key stakeholders.