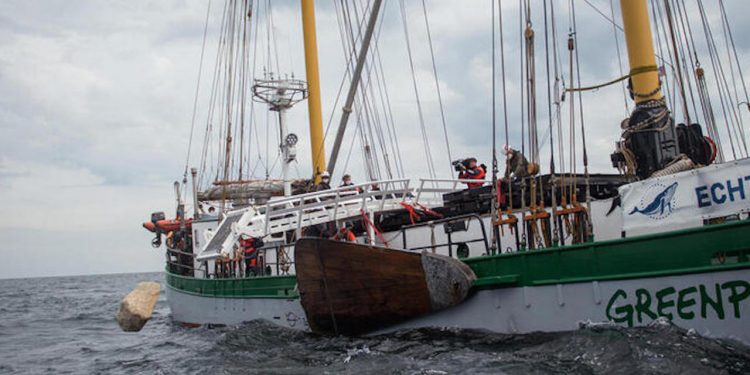 Time to take a stand on Greenpeace vigilantes

The NFFO has written to the leaders of political leaders, pressing them to condemn Greenpeace’s most recent publicity stunt in unequivocal terms.

The NFFO is seeking to establish the politicians’ positions on acts by Greenpeace that are clearly in breach of a number of laws and regulations that govern the dumping of material at sea, as well as potentially endangering the lives of fishermen.

Greenpeace have a track record of this style of activism, having conducted similar stunts in the Baltic and North Sea in the last.

You have doubtless learnt that this week Greenpeace have been dumping large boulders to obstruct legitimate fishing activity in the Offshore Brighton Marine Conservation Zone, the NFFO’s letter to UK politicians reads.

We want to know where you stand on this type of illegal activity.

We all know that political parties court the green vote. For the record we fully acknowledge that, as an industry, we need healthy seas and a functioning ecosystem and that well- planned and implemented marine protected areas have a role in achieving these objectives.

But we want to know if you publicly condemn, in unequivocal terms, vigilante action that is illegal, and recklessly endangers crews and fishing vessels. Whatever differences we may have with the Government over the implementation of its policies on marine protected areas, we need to know that we are not moving into an era where policy is dictated by media savvy bullies.

In short, we need to know whose side are you on?

I look forward to hearing from you as a matter of urgency.

The NFFO has also written to the Marine Management Organisation, outlining that it is clear that Greenpeace believes that is is operating under an umbrella of impunity and will continue, and possibly escalate, illegal activities against the fishing industry at time and place of their choosing.

You cannot but be aware of the effect that the MMO’s lack of action on this issue has on the fishing industry’s morale and perception that they are not being dealt with in an even- handed way. Greenpeace may have friends in high places and the media but this cannot abrogate the MMO from its responsibility to execute its duties fairly, proportionately and in an even handed manner.