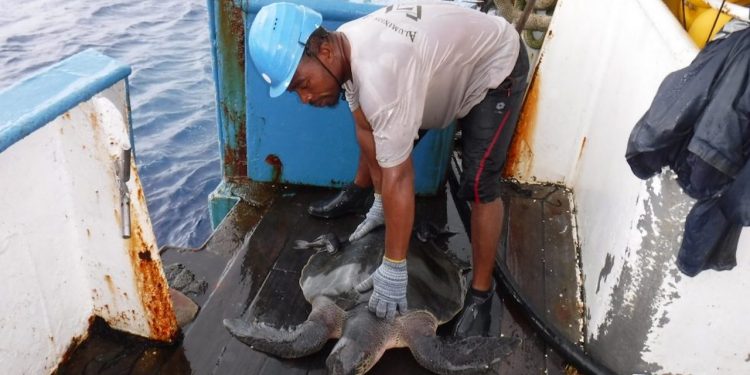 The Spanish tuna industry group OPAGAC-AGAC has undertaken 28 research projects in the last four years, directly or in collaboration with third parties, to minimise the impacts of the tuna purse seine fishery on the ecosystem and guarantee the biological sustainability of tropical tuna in the Atlantic, Indian and Pacific Oceans.

The sector has invested €17.3 million in this, basing its projects on real operational data obtained from the fleet, making it one of the most transparent in the world by providing and sharing information with more than a dozen entities.

The projects undertaken by the fleet during this time have concerned a variety of themes, such as scientific studies to facilitate the assessment of tropical tuna stocks, catch estimates by species and size, review of collection, management and notification systems of catch data, by-catch and the development of release mechanisms, new materials for the creation of non-entangled and biodegradable FADS, and ventures for the recycling and reuse of fishing gear.

‘One of the scourges of world fishing activity is the opacity of data or, alternatively, the lack of sufficiently reliable validation mechanisms. The Spanish fleet continues to work to improve its transparency and provide the best information necessary for responsible management of the resources on which the lives of our fishermen and the viability of our companies depend,’ said OPAGAC managing director Julio Morón.

‘In the midst of the era of Big Data and data analytics, governments and regulatory bodies should seriously consider what to do with the players of other fleets that, as everyone knows, hide basic catch information and systematically oppose increasing observer coverage, which in some fleets is 0% – compared to 100% for our vessels.’

During 2022, the plans are to launch four new projects, as well as continuing those already in progress.
This year, one of the most important has been developed in collaboration with AZTI to evaluate the mortality rate of species caught incidentally during fishing activity, mainly sharks, rays and turtles.

The study, in addition to using the marking of specimens to be able to monitor their activity after being released, will also analyse lactic acid levels of these specimens in order to determine the probability of mortality.

The objective is to reinforce its Code of Good Practices with these projects to reduce the mortality of these incidental catches as much as possible, although the tuna purse seine gear is one of the most selective and with the lowest rates of by-catch.

According to Julio Morón, the tuna fishermen themselves frequently suggest possible solutions to scientists and vessel operators to minimise by-catch or improve FAD design.

He commented that this proactive attitude is because these are the people with the strongest interest in maintaining optimal sustainability, and the first to lose out when things go wrong.