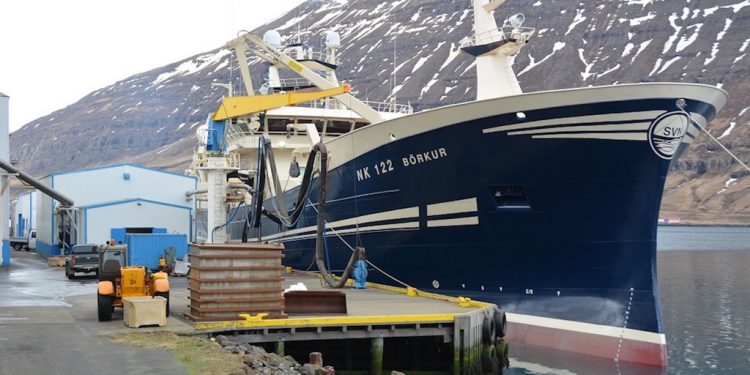 Fishing for blue whiting is underway in the grey zone south for the Faroe Islands, with Icelandic and Faroese pelagic vessels at work there.

The first landing in Iceland was made by Vilhelm Thorsteinsson, which docked with a full trip of 3100 tonnes, taken in just six tows.

‘There isn’t much to be seen, but fishing went pretty well,’ said skipper Birkir Hreinsson.

‘We docked with a capacity trip of 3100 tonnes, all of which is chilled. This was caught in six tows, from ten and up to 18 hours each. There were four days from shooting away to start with at the eastern side of the grey zone to setting off home with full tanks. The fish are moving north now, and there has been some good fishing on the Scottish side of the line.’

He added that there hasn’t been as much fishing as usual in UK waters, with especially few Norwegian pelagic vessels at work.

‘I’m optimistic about the rest of the season’s fishing. It looks good,’ he said.

The Síldarvinnslan plants in both Neskaupstður and Seyðisfjörður are now producing.

Vilhelm Thorsteinsson was followed to Neskaupstaður by Hákon with 1700 tonnes on board, and Börkur landed 3000 tonnes at the Seyðisfjörður factory, with Börkur on the way with full tanks.

‘The fish is coming to us chilled and fresh,’ said Eggert Ólafur Einarsson, factory manager at the Seyðisfjörður fishmeal plant.

‘Blue whiting aren’t very fat at this time of year, so we don’t get a large fish oil yield, but we could hardly expect better raw material for producing fishmeal.’

Both plants are now also running on electricity as national power company Landsvirkjun licensed both to use electrical power to drive production.